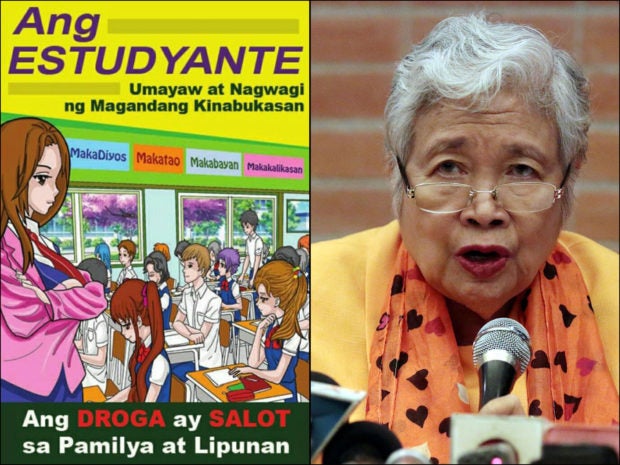 The cover of the comic book and Education Secretary Leonor Briones. INQUIRER.net photo

Education Secretary Leonor Briones has expressed support for the efforts of a youth group to teach the younger generation of the perils of illegal drugs in a way that they can clearly comprehend—comic book anime format.

The anti-drugs comics entitled “Ang Estudyante—Umayaw at Nagwagi ng Magandang Kinabukasan,” are being distributed to public school students in order to deliver the government’s anti-drugs message that can also target the interests of the younger generation.

Briones lauded the Young Filipino Christian Students Anti-Drug Movement for teaching the children about the dangerous effects of illegal drug abuse not just to themselves but also to their families and to the society in general.

The secretary of the Department of Education (DepEd) said this form of information drive is necessary to educate the students of the ill-effects of illegal drugs to people and their surroundings.

Briones’ message of support was included in a note printed on “Ang Estudyante—Umayaw at Nagwagi ng Magandang Kinabukasan,” which was conceptualized by Edgar Movido, founder of the movement.

“Exposing children to the anti-drugs materials would better equip them to make the right decisions for themselves so that they are not influenced or misled by those involved in illegal drugs,” Briones said in a statement.

She also cited the important role of parents and teachers in inculcating the proper values and supporting the productive endeavors of the young to distract them from the influence of illegal drugs.

Movido said the comic-magazine aims to promote awareness among our children about the perils of illegal drugs and the role of DepEd is crucial to the upbringing of our children.

The anti-illegal drug group is initially donating 10,000 copies of the comics to be distributed in public elementary and secondary schools in Metro Manila.

Movido also called on the help of local government units to support the information campaign so it can also be distributed for free in the provinces.

Last year, Briones ordered the inclusion of anti-illegal drug education in schools nationwide through the National Drug Education Program, in support of the government’s campaign against illegal narcotics. /jpv

Read Next
Suspected communist rebels torch heavy equipment in Cagayan
EDITORS' PICK
Geek out at TOYCON 2022 powered by Smart Signature
UK’s Boris Johnson will resign, BBC reports
High inflation: Your P1 is now worth only 87 centavos
High-risk pregnancy: Reducing your risk is in your hands
Unemployment rate up to 6% in May
House energy committee chair Arroyo bats for cheap electricity
MOST READ
Suspect in grisly killing of missing woman in Bulacan arrested
Kim Atienza’s daughter flaunts bikini body in response to critics of her ‘revealing photos’
Cop slain in Isabela ambush
FDA probes popular Filipino noodle brand for ‘high level of ethylene oxide’
Don't miss out on the latest news and information.