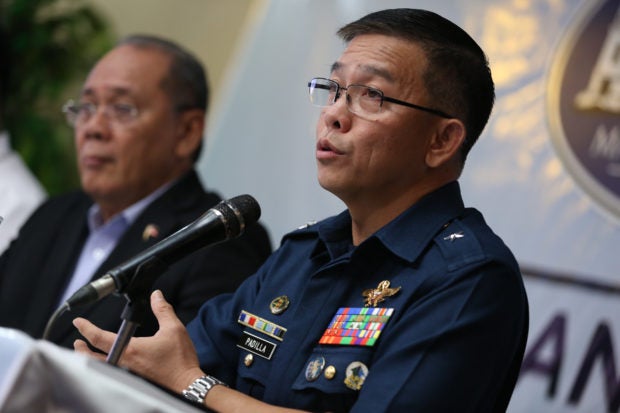 The military on Friday confirmed that the communist rebels and other lawless armed groups in Mindanao are planning to mount destabilization moves against President Rodrigo Duterte.

“Most of them are Reds and the armed elements in Mindanao,” Major Gen. Restituto Padilla said in a Palace briefing.

His statement came two days after Duterte said the communists and the “yellows,” or organizations connected with the Liberal Party (LP), were in alliance to oust him.

Asked about the involvement of the President’s political opponents, Padilla said, “there may be but I am not privy to this information yet.”

On Wednesday, Duterte said the LP and the communist rebels were reuniting to remove him from the presidency.

“The President has access to more information than we do. Because most of our agencies submit to the President information. And we submit to him as well what only comes from our part,” Padilla said.

“So we do continue to monitor the security landscape, and that includes other areas not only in Mindanao but the entirety of the archipelago,” he added.

The military official said Duterte’s political opponents were not the only one planning for his removal in office.

(So far, if the President refers to the ones that are planning, we are seeing something other than that.  And it is not only the opposition, we are monitoring the armed groups.)

“Yung sa side ng politics, may iba pong nagmo-monitor (On the political side, there are other organizations monitoring that),” he added.

He said groups against the President may be forming an alliance to remove the chief executive.

Padilla hit the New People’s Army, saying their end goal was to take over the entire country.

“The objective of the NPA is actually to take hold of the whole Philippines,” he said.

The peace talks between the government and the communists collapsed after Duterte was irked with their continued attacks against government forces. /jpv