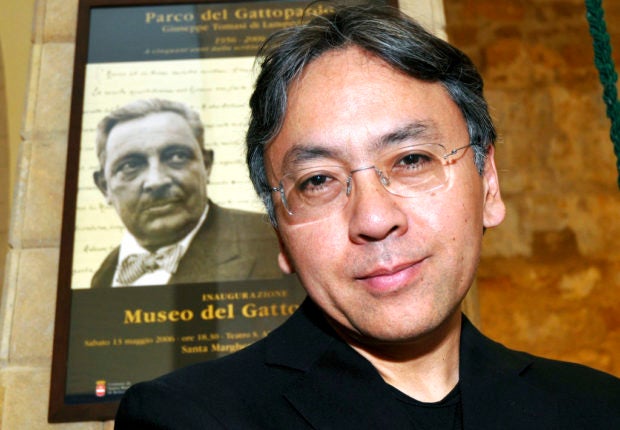 FILE – In this Saturday, Aug 8, 2009 file photo, author Kazuo Ishiguro poses for photographers before receiving the “Giuseppe Tomasi di Lampedusa” prize for literature, in Santa Margherita Belice, near Palermo, Sicily, southern Italy. The Nobel Prize for Literature for 2017 has been awarded to British novelist Kazuo Ishiguro, it was announced on Thursday, Oct. 5, 2017. (AP Photo/Alessandro Fucarini, File)

STOCKHOLM  — Kazuo Ishiguro, the Japanese-born British novelist best known for “The Remains of the Day,” won the Nobel Literature Prize on Thursday.

The selection of the 62-year-old Ishiguro marked a return to traditional literature following two years of unconventional choices by the Swedish Academy for the 9-million-kronor ($1.1 million) prize.

“He’s a very interesting writer in many ways,” said Sara Danius, the academy’s permanent secretary. “I would say that if you mix Jane Austen — her comedy of manners and her psychological insights — with Kafka, then I think you have Ishiguro.”

Ishiguro was born in Nagasaki, but moved with his family to Britain when he was 5.

The academy said that Ishiguro’s eight books are works of emotional force that uncover “the abyss beneath our illusory sense of connection with the world.”

In “The Remains of the Day,” a butler at a grand house looks back on a life in service to the aristocracy. The book’s gentle rhythms and “Downton Abbey”-style setting gradually deepen into a darker depiction of the repressed emotional and social landscape of 20th-century England.

Like “The Remains of the Day,” his 2005 novel “Never Let Me Go” is not what it seems. What appears to be the story of three young friends at a boarding school gradually reveals itself as a dystopian tale with elements of science fiction that asks deep ethical questions.

Although Ishiguro did not return to Japan until his mid-30s, his first two novels, “A Pale View of Hills” and “An Artist of the Floating World” both centered on Japanese characters.

He said in 2015 that he’d noticed that “because it was a novelty that someone with a Japanese background was writing novels in English, all the (reviewers’) metaphors tended to be Japanese-y. They would talk about a very still pond. With carp.”

“An Artist of the Floating World,” in which a Japanese artist looks back on his life, was a finalist for the prestigious Booker Prize for fiction. He won the Booker in 1989 for “The Remains of the Day.”

Danius said the choice of Ishiguro did not show intention to avoid the controversy sparked by last year’s pick of Dylan.

TAGS: ", "The Remains of the Day, Kazuo Ishiguro, Nobel Prize