8 terrorists yield with 9 hostages in Marawi 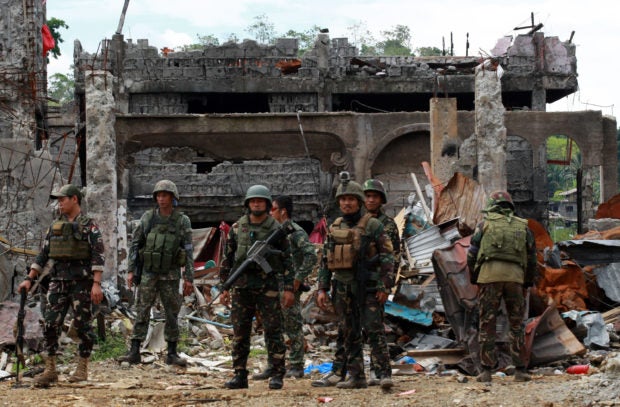 NEARING END Soldiers on the front line in the war against Islamic State-inspired terrorists in Marawi City are happy about reports from their superiors that the crisis is ending soon. —JEOFFREY MAITEM

MARAWI CITY — Eight gunmen believed to be members of the Maute terror group emerged from the battle zone here and surrendered to the military on Wednesday, a local official said.

The gunmen also turned over nine hostages to the military, according to Zia Alonto Adiong, spokesperson for the Lanao del Sur crisis management committee.

Adiong gave no further details, but he said the development was “clear evidence we are approaching the end of the war.”

Not confirmed by military

But the Joint Task Force Ranao said it could not confirm the reports.

Col. Romeo Brawner, deputy commander of the task force, said he could confirm only the surrender of three Maute gunmen and the rescue of five hostages over two weeks ago and the rescue of Catholic priest Teresito Soganub before that.

Brawner also said he could also confirm the rescue of 1,733 hostages and civilians since May 23, when terrorists from the Maute and Abu Sayyaf groups who pledged allegiance to the Islamic State (IS) jihadist group in the Middle East rampaged across Marawi.

The terrorists seized large parts of the city to establish an IS enclave in Southeast Asia.

More than 800 people have died in the fighting, including 155 government troops, as of Monday.

Brawner said the military had no information about the development reported by Adiong.

“We will present them to the public if there are such hostages rescued from the front lines,” he said.

Brawner said the military continued to persuade the remaining terrorists in the city to surrender.

“We are also trying to convince them to release the hostages and to surrender so that the crisis here will be over, but if they don’t want to surrender and continue fighting, our troops will finish them,” he said.

Brawner said it was likely the terrorists would eventually use the hostages as human shields to protect themselves as they escaped from Marawi.

The battle for control of the city becomes fiercer every day, as the terrorists run out of space to move, Brawner said.

He declined to say how large the remaining battle zone was but said the fighting may not last long, as the terrorists were running out of food, water, medicine and ammunition.

The military, however, could not launch a major assault because that would endanger the lives of the hostages.

Going by information from escaped or rescued hostages, the military said 46 hostages, some of them children, remained in the hands of the terrorists.

“[O]ur ground commanders told us that this week is very critical,” Brawner said.

President Duterte visited the troops on Monday and after getting briefed by the commanders on the situation said the battle for Marawi could be over  soon.

The troops are looking forward to going home and spending time with their families.

Sgt. Celso Ebanos of the Army’s 1st Scout Ranger Company said he would immediately apply for leave once the war was over.

“I have two children. My eldest is 6 and the second, 3. [My] second child had a birthday party recently and I wasn’t there,” said the 40-year-old native of Sultan Kudarat province.

Sgt. Jerry Villarosa, 38, said he was looking forward to a vacation “if my commanders will allow me to have one.”