“What bloggers like Mr. Nieto did is a demonstration that they want the stature of mainstream media without similar limitations,” Hontiveros said during the Senate committee on public information and mass media hearing on fake news, Wednesday.

“I’m very disturbed madam chair, that a resource person invited by the Senate has disrespected a member of the Senate and right at her place of work to pose such poses and then to post such posts and share them, gloating over the continuing misfortune of a person,” she added.

However, Nieto, who is also a consultant of the Department of Foreign Affairs, insisted that he does not think that “he should be nicer to people on his personal blog.”

“When I broadcast stuff on my Facebook page, that is Rey Joseph Nieto speaking as a regular citizen. But when I give advice to the OUMWA (Office of the Undersecretary on Migrant Workers Affairs) that’s where my job kicks in,” Nieto said.

“So as to the question whether I should be nicer to people on my personal blog, I do not think so. So instead of blaming me for what I say, maybe people should start to listen, because after all, (there’s) democracy,” he added.

Pangilinan meanwhile repeatedly asked Nieto if he was the person in the photo, to which he answered, “Yes.” 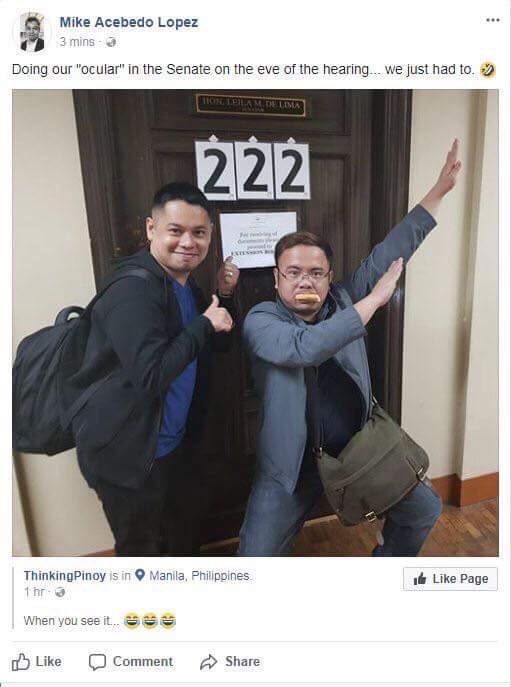 But Nieto insisted that it was his friend Mike Lopez, who posted the photos on Tuesday.

Senator Leila De Lima’s camp, meanwhile, demanded for a public apology due to the “taunting photos” which “ridiculed” her.

“We take serious offense at the discourteous behavior of individuals by the name of Rey Joseph ‘RJ’ Nieto and Mike Acebedo Lopez when they posed taunting photos to ridicule Senator Leila M. de Lima right in front of our office as they visited the Senate for an interview last Oct.3,” Ferdie Maglalang, chief communications officer of De Lima, said in a statement. /je