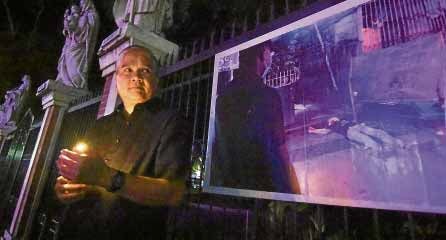 Senators on Tuesday said they wanted to hear the testimony of police officers who wanted to disclose their participation in unlawful killings in President Rodrigo Duterte’s war on drugs and sought protection from the Catholic Church.

Sen. Panfilo Lacson said his committee on public order and dangerous drugs would invite those police officers to a hearing by coordinating with the Catholic Bishops’ Conference of the Philippines (CBCP).

“I’m just as intrigued as anybody whether stories of state-sanctioned, drug-related extrajudicial killings are happening or not, aside from those that we have already investigated and which the Philippine National Police leadership, the National Bureau of Investigation and other instrumentalities of government have always cooperated,” Lacson said in a text message.

Lingayen-Dagupan Archbishop Socrates Villegas, president of the CBCP, said in a statement on Monday that police officers who wanted to divulge their participation in summary executions in the war on drugs had sought protection from the Catholic Church.

Villegas said the Church was willing to grant the police officers and their families accommodation, shelter and protection “within the bounds of Church and civil laws.”

The Church, however, will “look prudently into the sincerity of their motives and the veracity of their stories,” he said.

He urged volunteer lawyers and alternative law groups to help the police officers in preparing their statements, stressing that the Church would not influence the officers’ testimony.

PNP Director General Ronald dela Rosa on Tuesday said he would not prevent officers involved in the war on drugs from seeking Church protection and testifying to their participation in unlawful killings provided they told the truth.

Dela Rosa expressed hope that the Church protection would not turn into a “fishing expedition.”

“If it [the police officers seeking asylum] is true, they should present the policemen in the Senate. We have no problem with that,” he told reporters after the signing of an agreement between the PNP and the Light Rail Transit Authority.

Dela Rosa, however, called critics of the war on drugs “ingrates.”

“I tell you frankly, you can criticize us to high heavens, but I tell you straight in your eyes, the critics, I will tell you you are ingrates,” he said.

He said the critics of the crackdown knew they and their families benefited from the improvement of the peace and order situation brought about by the war on drugs.

But he said he was referring to all critics of the war on drugs and not to any particular critic of the campaign.

Catholic priest Jerome Secillano said the Church’s grant of sanctuary to police officers who wanted to unburden their conscience was not intended to undermine the Duterte administration.

“Definitely, the Church will not take steps to destabilize the institution or to undermine the President. This is all in the quest of truth,” said Secillano, executive secretary of the CBCP’s permanent committee on public affairs.

Secillano said providing sanctuary to those who needed it was an old tradition of the Church.

More than 3,800 people have been killed during Mr. Duterte’s 15-month-old crackdown, all during police operations.

Human rights groups say that the death toll is much higher and that the official figures overlook murders attributed to shadowy vigilantes.

Some activists say unknown gunmen have collaborated with police to kill drug dealers and users.

Police and the government vehemently reject those allegations and accuse the critics of exaggerating the death toll for political gain.

Lacson’s committee is conducting an inquiry into the police killings of minors.

Next week the committee will call PO1 Vicente Tacorda, who in May disclosed that his superior ordered him to kill five or seven drug suspects, but recanted his statement in June.

Senators Grace Poe and Risa Hontiveros welcomed the willingness of police officers to testify on the killings, as both lauded the Church for taking the officers in.

“These are all positive developments we look forward to all for the sake of serving truth and justice to the victims and their families,” Poe said in a statement. —WITH REPORTS FROM THE WIRES