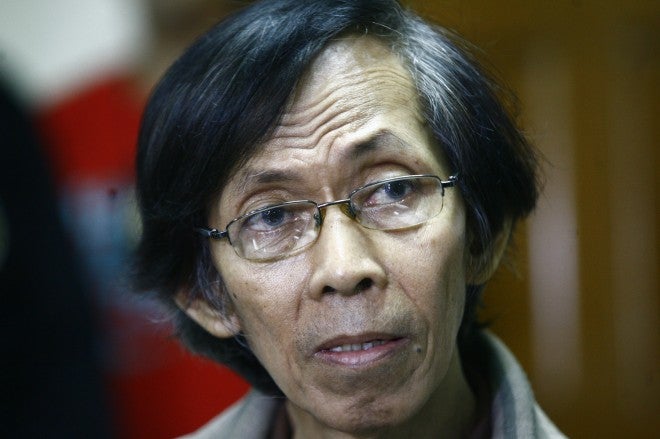 Retired Army Maj. Gen. Jovito Palparan Jr. must face the music after the Court of Appeals jettisoned his attempt to void his arrest over the 2006 abduction of two students of the University of the Philippines (UP).

The appeals court’s Fourth Division has upheld Palparan’s indictment for kidnapping and serious illegal detention in connection with the disappearance of UP students Karen Empeño and Sherlyn Cadapan.

The two were seized by suspected military agents allegedly upon Palparan’s order in Hagonoy town, Bulacan province, along with farmer Manuel Merino on June 26, 2006. The three had been missing since then.

Palparan had been called the “butcher’’ by activists for his key role in the military’s anti-insurgency war.

In throwing out his petition for certiorari, the court said Palparan’s arguments lacked merit and were “evidentiary matters’’ which should be taken up in a formal court hearing.

It said the retired Army official also failed to prove that Judge Teodora Gonzales of the Malolos City Regional Trial Court Branch 14 committed grave abuse of discretion in issuing the warrant for his arrest and for junking his motion to quash.

“The trial court did not err in denying the subject motion to quash information and warrant of arrest,” read a portion of the appeals court’s 15-page decision.

“[Palparan] did not show that the trial court had no jurisdiction or exceeded its jurisdiction in denying the motion to quash or gravely abused its discretion amounting to lack or excess of jurisdiction in its denial,” it added.

After his failed bid to have the case dismissed, Palparan should have opted to “enter a plea, go to trial, and should the decision be adverse, reiterate on appeal from the final judgment and assign as error the denial of the motion to quash,” the court said.

Granting a petition for certiorari was only necessary when the petitioner was able to show that a “remedy of appeal would not afford adequate and expeditious relief” from a decision issued by a lower court judge, the court explained.

“Petitioner carries the burden of showing that the attendant facts and circumstances fall within any of the cited instances. He failed to do so in this case,” it ruled.

Despite allegations of human rights violations levied against him, Palparan was lauded by then President Gloria Macapagal-Arroyo for leading the government’s anti-insurgency campaign during her administration.

Palparan was arrested in a house in Sta. Mesa, Manila, on Aug. 12, 2014, after three years in hiding. He has since been held in a detention cell at Camp Aguinaldo in Quezon City.