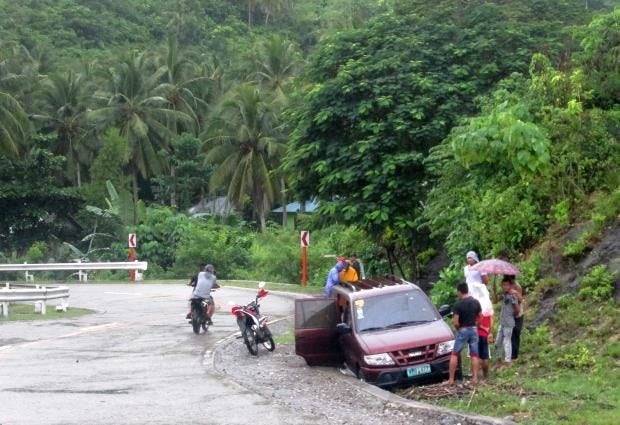 The damaged Isuzu Crosswind that was carrying the foreigners after being accidentally hit by NPA rebels aiming at an overtaking police vehicle on Tuesday, Oct. 3, 2017.

BACOLOD CITY – Two foreigners were looking forward to frolic in crystal clear waters of Sipalay City in Negros Occidental on Tuesday afternoon. But they ended up being accidentally wounded, along with their Filipino driver, in an ambush staged by communist rebels on a police vehicle.

Karl Christer Arvidson, 48, of Brazil and Juliana Eeiko Palmero,42, of Sweden, were recuperating from their gunshot wounds in a hospital in Bacolod.

On Wednesday, hospital staff said the foreigners had so far refused to issue a statement as they were still traumatized by their experience.

Arvidson, who was wounded in the left hand, was still shaken by the incident, while Palmero was in pain from the gunshot wounds on her left shoulder.

The driver, Jason Tomayao of Barangay Alijis, Bacolod City, was wounded in the face, stomach, and thigh. He had to undergo surgery and still had difficulty speaking.

The foreigners and their driver were not the targets of the ambush, which happened at 1:15 on Tuesday in Sitio Sojoton, Barangay Caliling, Cauayan town in Negros Occidental.

They just happened to be tailing a police vehicle with five officers in it.

Though aiming at the police vehicle, the rebels hit instead the red Isuzo Crosswind that Tomayao was driving with the two foreigners as passengers.

Chief Insp. Gary Alan Resuma, Cauayan police chief, said of his police officers were on their way to Sipalay City to pick up an arrested murder suspect, when they were also informed of an attempted robbery in a restaurant-bar owned by a foreigner in Barangay Caliling, Cauayan.

The robbery attempt was staged by armed men wearing balaclavas. It was the wife of the owner who called for help.

Investigators believe the attempted robbery was staged by the same rebels who carried out the ambush to draw police officers to the area.

According to Resuma, the police vehicle was going uphill climb along a curved portion of the national highway of Sitio Buta. The rebels fired at it while it was overtaking the Crosswind carrying the foreigners.

The rebels hit the civilian vehicle, while the police officers managed to get out from the killing zone. They took cover in a ravine, from which they returned fire at the rebels who were positioned above them.

“The vehicle of the foreigners just happened to be at the ambush site when the attack was staged by about 30 rebels armed with high-powered weapons,” Resuma said. “The policemen were their target.”

None of the police officers was hurt.

Citing reports of civilian witnesses, Resuma said three of the rebels were injured. They were seen being carried away by their companions while withdrawing from the ambush site.

The NPA followed a similar tactic on last July 21 in Guihulngan City in Negros Oriental. That was when they ambushed and killed six police officers who were on the way to check out a report of an ambush.

The police officers went to the site to rescue a councilor and his companions who were attacked by the NPA rebels.

Senior Supt. Rodolfo Castil, chief of the Negros Occidental Police Provincial Office, called on officers not to lower their vigilance while responding to reported crimes.