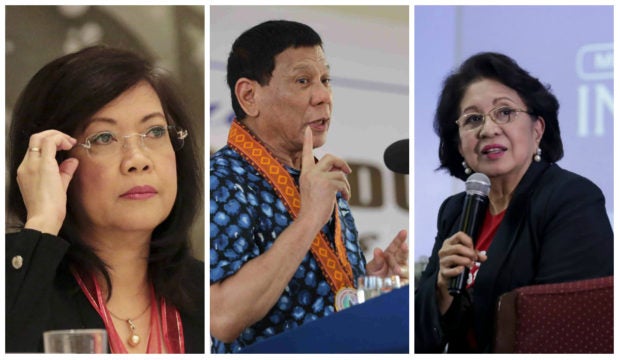 MARAWI CITY — President Rodrigo Duterte on Monday challenged Chief Justice Maria Lourdes Sereno and Ombudsman Conchita Carpio Morales to go with him to Congress and open their bank books in front of lawmakers.

“Just give us a table,” the President said, adding that this would show the people who was really corrupt.

“I have told you that mine could not be more than P40 million. It is a lifetime savings. I’m 72 now. I started working when I was 27. I became prosecutor,” he said during his visit here.

“I said you can shoot me, you can overthrow me if you want if it’s more [than P40 million],” he said.

He said that during his term as Davao City mayor, he had never been corrupt. Now that he was being accused of amassing more than a billion pesos in hidden wealth, he said he was challenging Morales and Sereno and other officials to open their bank accounts to the public.

“That’s my challenge to every government official and those who are pretending to be clean. Let us open our bank books so the people will know who are thieves and who are not,” he said.

The Office of the Ombudsman is investigating allegations that Mr. Duterte amassed more than a billion pesos in unexplained wealth but he said he would not submit to the Ombudsman’s jurisdiction.

Morales, who inhibited herself from the case, has authorized Overall Deputy Ombudsman Arthur Carandang to investigate the bank transactions of the President and his family based on the complaint filed by Sen. Antonio Trillanes IV.

Upping the ante, Mr. Duterte on Monday threatened to expose Sereno and Morales if they refused to heed his call for them to join him in stepping down.

“If these two resign, we will bow out at the same time, and I will resign as President of the Philippines. There’s no problem. Let the truth come out,” he said in a speech.

Over the weekend, he called on Morales and Sereno to resign with him and allow themselves to be investigated for corruption, and let the military and the police step in if they failed to reach an agreement.

In reiterating his demand that Morales step down, the President said that she was corrupt, which he said was the reason he was not submitting to the Ombudsman’s probe.

In accusing Morales of corruption, he narrated the story of former Insp. Rolando Mendoza, who hijacked a tourist bus and killed eight visitors from Hong Kong in 2010.

Mendoza, who was also later killed, the President said, had complained of being charged with misconduct because he could not produce the money demanded from him by someone from the Office of the Ombudsman. He was eventually dismissed from the service.

“That’s how crooked the Ombudsman is,” Mr. Duterte said.

He said he was just bringing out the truth and challenged the Ombudsman “to make public all cases you dismissed because of money.”

He said he was willing to resign with Morales and Sereno so that “we will have a better country.”

“Maybe for you to find a new leader,” he added.

The President said the supposed report of the Anti-Money Laundering Council (AMLC) on his bank transactions was illegally obtained and was falsified to show he had so much money.

He said the one responsible for illegally taking it out was the mistress of a colonel.

Also on Monday, presidential spokesperson Ernesto Abella accused Sereno and Morales of “allowing themselves to be used” by certain political forces to discredit Mr. Duterte to spark public outrage and oust him.

The Ombudsman’s disclosure of Mr. Duterte’s alleged bank accounts was a violation of the Code of Conduct and Ethical Standards for Public Officials and Employees, according to chief presidential legal counsel Salvador Panelo.

In a statement, Panelo said the code’s implementation rules prohibited the disclosure of “investigatory records” that would deprive a person “of a right to a fair trial.”

Carandang said the Office of the Ombudsman had always “observed confidentiality” in its investigation into the complaint filed by Trillanes against Mr. Duterte when the President was still Davao City mayor.

In a statement, he said the details of the documents from Trillanes, which had been shown to him by two media outfits, were “more or less” the same as those from the bank transaction history records the Office of the Ombudsman received from the AMLC.

He said the records were used by the AMLC and the Ombudsman for intelligence sharing purposes.

Morales said on Friday that the President need not fear the Ombudsman probe if he had nothing to hide.

In Manila, Senate President Aquilino Pimentel III said Mr. Duterte was “theoretically correct” in refusing to submit himself to the investigation by the Office of the Ombudsman as no one had jurisdiction over him except Congress. —With reports from Philip C. Tubeza, Jocelyn R. Uy and Nikko Dizon