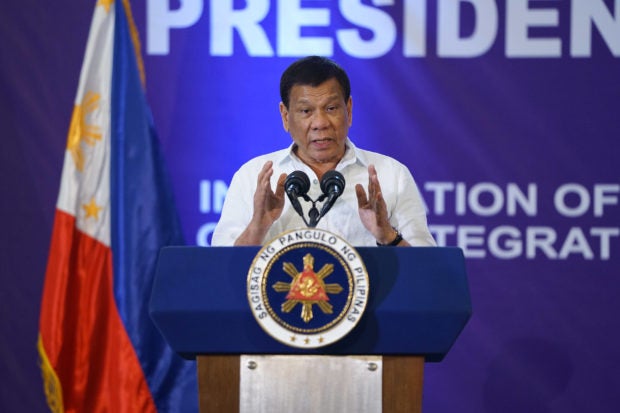 EQUAL APPLICATION OF LAW President Duterte reiterates that he will enforce the law equally to any citizen in line with his antidrug campaign. He spoke during the oath-taking ceremony of the new officers and members of the Integrated Bar of the Philippines (IBP) chapter in Davao City on Saturday. —MALACAÑANG PHOTO

President Rodrigo Duterte on Saturday night said he was not submitting himself to the jurisdiction of the Office of the Ombudsman, a constitutional body investigating allegations that he had amassed more than a billion pesos in unexplained wealth.

Mr. Duterte said submitting himself to the agency’s jurisdiction would be a “lousy thing” to do, claiming that the allegations against him were fabricated and the evidence illegally obtained.

In a speech before the Integrated Bar of the Philippines (IBP) Davao City, Mr. Duterte also challenged Chief Justice Maria Lourdes Sereno and Ombudsman Conchita Carpio Morales to “resign” with him.

He added that he would let the military decide should he and the Ombudsman not agree on the outcome of a case that he was encouraging men in uniform, who had been “unjustly convicted” by the Ombudsman, to file against the agency.

Reacting to the President’s earlier threat to form a commission that would investigate the Office of the Ombudsman, Morales on Friday said Mr. Duterte had nothing to fear if he had nothing to hide.

The President also defended himself from criticism from IBP national president Abdiel Dan Elijah Fajardo that he was being “onion-skinned.”

Mr. Duterte said he had the constitutional right to reply to the allegations against him and to protect the honor of his family.

“You just say, ‘Do not be onion-skinned.’ Who … are you to tell me in the face of fabricated evidence?” he said.

Mr. Duterte said the allegations against him were “fabricated and the evidence illegally obtained” by Overall Deputy Ombudsman Arthur Carandang.

Inhibiting herself from the case, Morales has authorized Carandang to investigate the bank transactions of the President and his family based on the complaint filed by Sen. Antonio Trillanes IV against the President.

“Waving fabricated evidence in front, lying through his teeth in front of the nation. And then you want me to submit to the jurisdiction of the Ombudsman and who will now investigate?” the President said.

Mr. Duterte said he would have the National Bureau of Investigation look into alleged corruption in the Office of the Ombudsman, particularly in cases involving policemen and soldiers.

He said he would talk to the policemen, soldiers and generals who were “unjustly convicted” after the Ombudsman filed cases against them.

“I will encourage them to file a case. And when the time comes, if we cannot agree with each other, then let us decide to submit it to the Armed Forces because there will be trouble,” said the President, who is also the Commander in Chief of all military forces.

He told Carandang to pray.

“I’m not threatening you. But if the Philippines goes to the dogs, I will go after you first,” he said.

Mr. Duterte said he would have Carandang, and not Morales, summoned before the NBI investigation.

“But certainly this Carandang, I can summon him because he committed a crime. Not an administrative one. I’m not trying him, because I’m not a judge. But he has to answer for this, or else, I will go there and bring him to the NBI,” he added.

Following the President’s threats, Trillanes on Sunday called on the people and cause-oriented groups to rally behind Morales and Carandang so that they would be able to fulfill their duty to hold liable corrupt officials.

In a statement, Trillanes told Mr. Duterte “to stop making threats against people who are standing for the truth and what is right.”

He urged Mr. Duterte not to hide under the power of the presidency.

“Be man enough to face the accusations against you. If you are not hiding anything, sign a [bank] waiver so that the truth would be known,” he said.

As for Sereno and Morales, the President accused the two officials of “letting themselves be used” against his administration and challenged them to resign along with him.

“I said I am ready to lose the presidency, my honor, my life and the presidency. I now challenge Carpio (Morales) to resign with me, and this Supreme Court justice,” Mr. Duterte said.

He also accused the Ombudsman of selective justice. “Why is it that our cases that are not even true are being (investigated) first?”

Investigations by the Office of the Ombudsman are being deliberately delayed for a fee so some corruption cases would not stand a chance at the Sandiganbayan, Deputy Minority Leader Harry Roque Jr. of the Kabayan party-list group said on Sunday.

Mr. Duterte did not initially name Sereno, but he castigated the Chief Justice later in his speech, alleging she was “corrupt.”

“I challenge the two [Sereno and Morales]. We will go to Congress (and), in a simple ceremony, we sign the letter of resignation … then let us open all the books, including yours,” he said.

“Who will decide? The Armed Forces and the police will decide it for us so that the country will not descend into chaos,” the President said.

He said his critics were accusing him of having over a billion pesos because they “added up” the different transactions involving his bank accounts.

“They counted it all over again. What happened to Corona is happening to me,” Mr. Duterte said, referring to the bank transactions of former Chief Justice Renato Corona that were totaled by a prosecution witness at his impeachment trial.

At the Senate impeachment trial in 2012, Corona was found guilty of not declaring certain bank deposits in his statement of assets, liabilities and net worth, and was subsequently ousted.

Mr. Duterte said his life savings did not go beyond P40 million, including the wealth he inherited from his parents.

“I could not have survived 22 years (in politics) if you, who are Davao residents, know that I am a thief,” he said in his speech in Davao City.

Under the Constitution, the President is immune from suits while in office. Mr. Duterte can be sued once his term ends. —With reports from Vince F. Nonato and Christine O. Avendaño