Duterte compares self to Corona as ‘lies’ are hurled against him

“What happened to (former Chief Justice Renato) Corona is happening to me.”

This was what President Rodrigo Duterte had to say to the accusations of unexplained wealth hurled against him, which he said were just “lies.”

“I do not lose my freedom of expression so there are lies based on baseless hundreds of millions and even if I wanted to steal, saan ko kukunin yang p***i* amount na yan?” Duterte continued during his speech before the Integrated Bar of the Philippines (IBP) Davao City Chapter on Saturday evening.

The President also slammed IBP President Abdiel Dan Elijah Fajardo’s statement against his threat to create a body to investigate the Office of the Ombudsman.

“But before going into the lies — there’s a lawyer who says ‘do not be too onion-skinned’ even in the face of fabricated evidence illegally obtained and added so several times, day in and day out,” Duterte said. 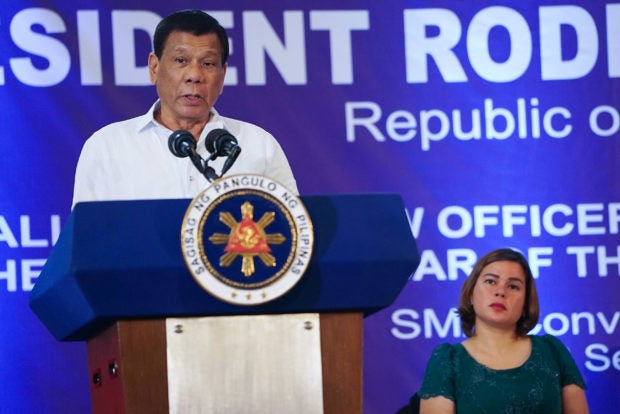 President Rodrigo Roa Duterte, in his speech during the oath-taking ceremony of the newly-installed officers and members of the Integrated Bar of the Philippines (IBP) Davao City Chapter at the SMX Convention Center in Lanang, Davao City on September 30, 2017, states that he is continuing his efforts to eliminate corruption in government. Also in the photo is the President’s daughter Davao City Mayor Sara Duterte-Carpio. RENE LUMAWAG/PRESIDENTIAL PHOTO

Fajardo earlier issued a statement and said public officials should not be sensitive because the Office of the Ombudsman is only doing its mandate – which is investigating and prosecuting possible erring government officials.

“Public officials must not be onion-skinned. Public office is a public trust. Upon assumption of public office, a government official holds his life open to public scrutiny,” Fajardo said in a statement.

“And you just say ‘do not be onion-skinned’. Who the fuck are you to tell me, in face of fabricated evidence. Sinabi ko na sa before the election wala ako niyan, at wala ako ngayon, I said to your sorrow (?). Ihampas ko sa mukha mo yang p**i* papel na yan,” Duterte said referring to Fajardo’s statement.

The President also denounced the Ombudsman’s move to look into his wealth, noting the Anti-Money Laundering Council’s (AMLC) denial that they have issued any information on his bank accounts.

“Tapos sabihin mo sa akin ‘do not be onion-skinned’ in face of the fabrication and the illegally obtained–? Onion-skinned yan. How about my right again to freedom of expression? Ikaw ganunin ko,” Duterte said.

“Wag na tayong magbolahan ‘yang mga pa-ek-ek ninyo sa publiko. I said I am ready to lose the presidency — my honor, my life, and the presidency,” he added.

Following this, he also dared Ombudsman Conchita Carpio-Morales and Chief Justice Maria Lourdes Sereno to resign with him.