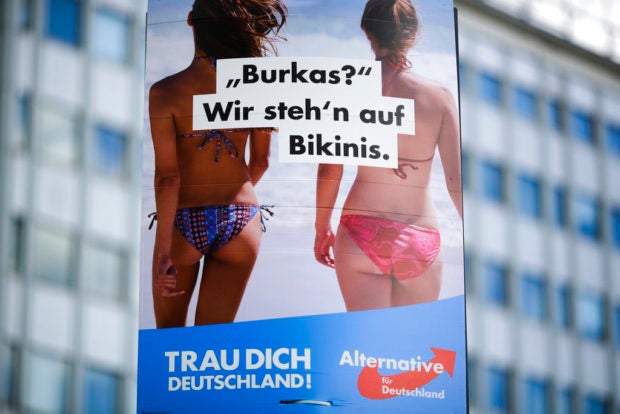 In this Aug. 13, 2017, file photo an election campaign poster of the German nationalist anti-migrant party AfD, Alternative for Germany, reading “Burkas? We like bikinis.” is displayed in Berlin. The sentence at the bottom reads: ‘Trust yourself Germany’. A law prohibiting any kind of full face covering but known popularly as the Burqa Ban, takes effect in Austria Sunday, Oct. 1, 2017. AP

VIENNA, Austria — A law prohibiting any kind of full-face covering, known popularly as the “Burqa Ban,” takes effect Sunday in Austria, where the strong support for it portends potential political upheaval in the upcoming national election.

Parties campaigning on an anti-migrant message are poised to win on Oct. 15 and to form a coalition government. Such a rightward swing in a country that’s had centrist governments almost consistently since World War II could have repercussions across Europe, emboldening politicians who take a hard line on Islam and immigration.

Last week, the right-wing, anti-migrant Alternative for Germany party won seats in Germany’s national parliament for the first time after featuring posters with the slogan “Burqas? We prefer bikinis” in its campaign. 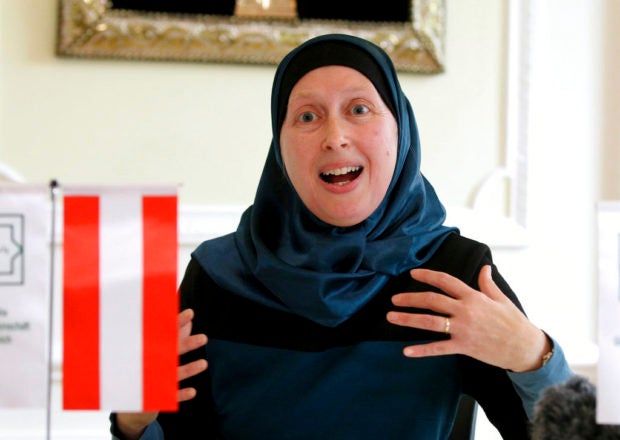 In this photo taken Wednesday Sept. 27 2017, Carla Amina Baghajati from the Austrian Islamic Religious Community gestures during an interview with The Associated Press in Vienna, Austria. A law prohibiting any kind of full face covering but known popularly as the Burqa Ban, takes effect in Austria Sunday Oct. 1, 2017. AP

The Austrian law — called “Prohibition for the Covering of the Face” — forbids off-slope ski masks, surgical masks outside hospitals and party masks in public. Violations carry a possible fine of 150 euros (nearly $180) and police are authorized to use force with people who resist showing their faces.

But its popular name reflects the most prevalent association — the garments some Muslim women wear to conceal their whole faces and bodies. The garments are rare in Austria even after the recent surge of migrants into Europe. Support for the law is strong nonetheless, reflecting anti-Muslim attitudes in the predominantly Catholic country.

“It’s not right that those living here don’t show their faces,” said Emma Schwaiger, who expressed support for the ban in a straw poll on the streets of Vienna.

Five in seven of those who said they backed the law also said they will vote for the two parties that critics link to anti-Muslim sentiment — the traditionally xenophobic Freedom Party and the People’s Party. The People’s Party avoids the Freedom Party’s inflammatory talk, but has swung radically from the center under new leader Sebastian Kurz to echo that party’s positions on migration.

The Social Democratic Party, currently the majority partner in the government coalition with the People’s Party, has been left struggling.

Under Chancellor Christian Kern, the Social Democrats are focusing on social topics and claiming credit for Austria’s recent economic upturn. But Kern’s message is not coming across well.

A Unique Research poll of 1,500 respondents published Thursday showed the Social Democrats with 27 percent support, ahead of the Freedom Party at 25 percent but trailing the People’s Party with 34 percent. The poll had a margin of error of 2.5 percentage points.

Previously associated with stagnation and lack of direction, the People’s Party was trailing in third place until Kurz, Austria’s telegenic 31-year old foreign minister, took leadership in May after securing party pledges of full authority.

He already was known Europe-wide for shutting down the West Balkans route into the prosperous EU heartland for migrants. With early elections set after the breakup of the coalition with the Social Democrats, he rapidly remade the party in his own image.

Although the People’s Party was part of the government coalition that opened its borders to more than 100,000 migrants in 2015, the party now says that “the political establishment failed in dealing with the refugee crisis.”

Calling for zero illegal immigration, he says migrants intercepted on the high seas should be shipped to refugee centers in North Africa instead of Europe. Migrants waiting for a decision on their asylum applications should be forced to work menial jobs in exchange for pocket money. And instead of the normal six-year waiting period for Austrian citizenship, those receiving asylum should wait for 10 years, he says.

Kurz has something else in his favor for an electorate disaffected with the status quo. “He was able — even though he was in government for more than six years — to present himself as the ‘change guy,'” said Thomas Hofer, a political analyst.

He now campaigns as the head of “Sebastian Kurz List.” Posters with his image mention the People’s Party as an afterthought. Turquoise has replaced the party’s official color of black.

Kurz also attracts Austrians who support the Freedom Party and its leader, Heinz-Christian Strache, on migration, but dislike the radical way they frame the debate.  Kurz, says Hofer, “uses a different kind of language, and it’s not extreme language — it’s plain talk.”

Kurz has pledged that the face-cover ban will be rigorously enforced. But Hofer dismisses the law as a “symbolic issue.” Muslim women leaders see as insincere the claim the law is intended to help oppressed women.

Carla Amina Bhagajati of the Islamic Religious Community in Austria said the “handful” of fully veiled women she knows of in Vienna “now are criminalized and … restricted to their homes.”

“This open society is, in a hypocritical way, endangering its own values,” she said. /cbb