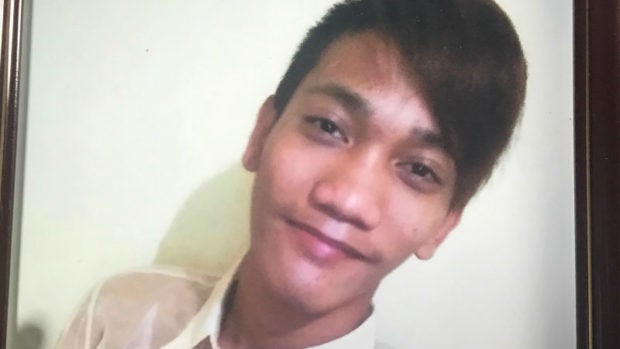 A 17-year-old boy was shot dead by unidentified men on a motorcycle in Central Bicutan, Taguig City, early Thursday afternoon.

Dave Galangue, who was also on his motorbike, was on his way to a laundry shop near Upper Bicutan Elementary School around 12:35 p.m. on Martizano Street when he was killed, police said.

The shooting was immediately reported to the nearby barangay hall by students who had just come from the school.

According to a barangay employee, footage from a closed circuit television camera installed by a resident in the area showed how the victim was tailed by the two assailants. When Galangue noticed he was being followed, he stopped and made a U-turn. The video showed them apparently having a brief exchange.

Galangue was about to run away when shot four times in the chest.

In an interview on Friday afternoon, Galangue’s mother Josefina Junsay, who was still waiting for her son’s body from the funeral parlor, could not believe how she lost Dave. “This morning, before I went to Laguna, I made him coffee. We also took selfies,” Junsay said.

“He was not the type who would talk about his problems, but he didn’t have enemies. And definitely he was not into drugs,” she said, noting that investigators didn’t find any drug in her son’s pocket or in his motorbike’s compartment.

Junsay said Galangue’s twin brother died seven years ago after being he hit by a stray bullet during a riot near their Taguig residence, while his sister died just last month due to natural causes.

The Taguig police are still verifying allegations made by the victim’s neighbors that the teenager was involved in drugs and robberies..

The victim’s girlfriend, also aged 17, said she was also not aware of anyone who would want to harm Galangue . “He had dreams of buying his own car and going to the US after finishing his studies, so both of us can live there. It was his dream,” she said.

Galangue dropped out of school in the eighth grade due to financial problems and started helping his mother, a balut vendor.

“But what he really wanted was to be a policemen. He admired them. Astig daw (because they look tough),” she said.

Also in Taguig on Thursday, another resident was gunned down by assailants on a motorbike in Barangay South Signal.

Raymond Pagatpat, 25, was walking on Tanyag Street around 10 p.m. when shot and killed on the spot.

A report sent to the media by the Southern Police District quoted barangay officials as saying that Pagatpat was involved in robbery-holdup incidents and was a known drug pusher operating in nearby
barangays.