‘Funds laundered by Trillanes may have bankrolled destab ops’ 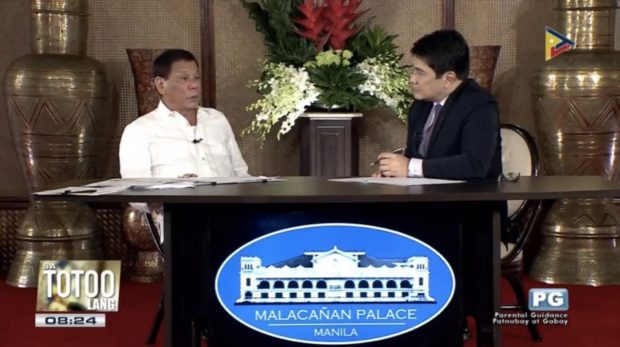 President Rodrigo Duterte said funds allegedly in offshore accounts of Sen. Antonio Trillanes IV may have been used to bankroll a destabilization campaign against the government.

But Trillanes, in a statement, dismissed these explosive allegations as Duterte’s way to distract attention from issues hounding the Chief Executive and his family.

In a recorded interview on state-run PTV4 aired on Friday night, Duterte said: “Based on analysis, the funds being laundered by Trillanes and his group may not be for their personal use, but rather is being used for their cause and possibly to destabilize government by paying for witnesses and funding for destabilization operations.”

The President revealed that a certain “Fabian Go” and a “Roberto Fong” were Trillanes’ co-depositors.

He said Trillanes was able to close his Singapore account on the night of September 8. Days later he signed a bank waiver and left for Singapore.

“He terminated it online on September 8, 2017 past 10 p.m. then left for Singapore,” the President said.

He claimed that almost P200,000 was transferred to a certain Fabian Go from the closed account of Trillanes.

Duterte also showed the amount of money which was allegedly deposited in Trillanes’ accounts.

The President said the persons he mentioned are currently based overseas.

The President said the funds transferred to Trillanes’ accounts were in small amounts to avoid being detected by the Anti-Money Laundering Council.

Asked about his source, Duterte said, “I cannot tell you the country.”

Asked where he thought the funds were coming from, he said Trillanes was asking for funds from many parties and “clients.”

He also alleged that Trillanes was also asking for a “quota” from other senators to add to his number of personnel. This was an “open secret,” he added.

Large corporations were asked for funds in exchange for not causing trouble for them, he further said.

“Mga bagong imbento ni Duterte. Anyway, that’s an obvious diversion from his billion peso bank accounts that were confirmed by the Ombudsman,” the senator said.

“Nonetheless, first thing on Monday, I would sign waivers for these accounts so that the AMLC can look into and examine them. Wala ng drama kasi wala akong tinatago,” he added.

He then dared Duterte: “What about you Mr. Duterte kelan ka magpapakalalaki at pipirma ng waivers?” With a report from  Leila Salaverria, Philippine Daily Inquirer