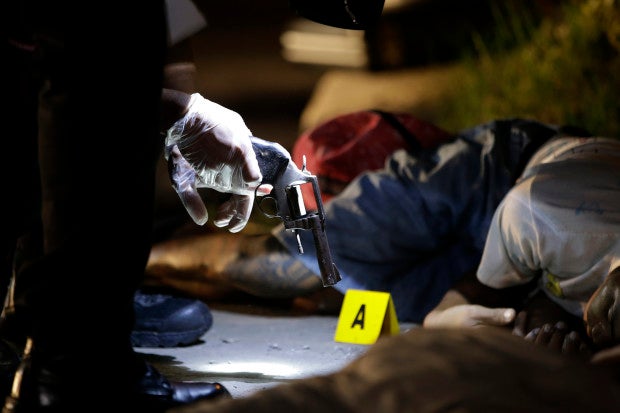 In this Sept. 6, 2016 photo, policemen check the gun recovered from one of two unidentified drug suspects after they were shot dead by police as they tried to evade a checkpoint in Quezon city, north of Manila, Philippines. Bodies had begun turning up in cities all over the Philippines ever since President Rodrigo Duterte launched a controversial war on drugs this year. Drug dealers and drug addicts, were being shot by police or slain by unidentified gunmen in mysterious, gangland-style murders that were taking place at night. AP FILE PHOTO

As more than half of Filipinos do not buy police’s ‘nanlaban’ tales, another Social Weather Stations (SWS) survey revealed that three out of five Filipinos believe that drug suspects who already surrendered to authorities still end up dead under the Duterte administration’s campaign against illegal drugs.

In its Second Quarter 2017 survey, SWS said that 63 percent of respondents agreed that: “May mga suspect sa illegal na bentahan ng droga na sumuko na, pero pinatay pa [There are suspects in the illegal drug trade who already surrendered, yet were still killed].”

Only 20 percent disagreed to this survey statement, while 17 percent were undecided about it.

The SWS nationwide survey was conducted from June 23 to 26, involving 1,200 respondents, with a margin of error of plus-or-minus three percentage points.

The proportion of those who agreed that some drug suspects who had already surrendered to the police still end up killed was highest in Metro Manila at 75 percent.

This was followed by Mindanao and the rest of Luzon, both at 63 percent; and Visayas at 53 percent.

The same survey showed that one in every five Filipinos, or 17 percent, know someone who was summoned under the government’s Oplan Tokhang even if they were not drug pushers.

The highest proportion of those who know someone falsely summoned under Oplan Tokhang was in Metro Manila at 22 percent, followed by Visayas at 18 percent, and Mindanao and the rest of Luzon, both at 16 percent.

Meanwhile, Philippine National Police (PNP) spokesperson Chief Supt. Dionardo Carlos said that the latest SWS surveys will serve as a challenge for the PNP “to deliver the facts and the true and complete information.”

“The PNP respects the survey and the responses of the public based on existing perception at the time when the survey was conducted,” Carlos noted.

The latest poll results came two days after a separate SWS data disclosed that 54 percent of Filipinos do not agree with police’s claim that those killed under the Duterte administration’s war on drugs fought back.

READ: Majority of Filipinos do not believe police’s ‘nanlaban’ claim

Since the government launched its bloody campaign against illegal drugs last year, many instances of victims getting killed despite turning themselves in to the police’s Oplan Tokhang have been reported. The police usually claimed that killed suspects returned to the illegal drug trade after yielding to authorities.    With reports from Frances G. Mangosing