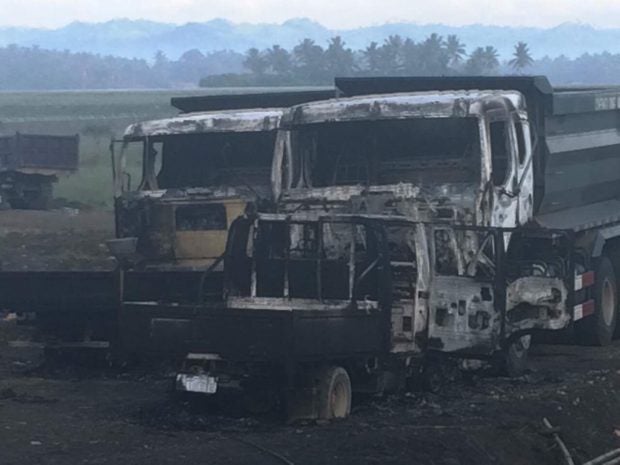 LEGAZPI CITY—Suspected members of the New People’s Army (NPA) on Thursday night burned at least 11 heavy equipment used in the construction of the Bicol International Airport in Daraga town in Albay province, police said Friday.
Chief Inspector Arthur Gomez, information officer of the Albay police, said that the rebels fired upon the police’s 2nd Maneuver Platoon of Albay Public Safety Company in Barangay (village) Bascaran at around 8 p.m. in order to distract the policemen and prevent them from responding to the incident at the airport facility located at nearby Barangay Alobo.
Gomez said while the police were engaged in the firefight that lasted for about 25 to 30 minutes, they heard loud explosion at the construction site within the international airport about three to four kilometers away from Bascaran.
When the police were finally able to respond and check the area, they found heavy equipment belonging to EM Cuerpo Builders Inc. being set ablaze by the armed men, Gomez said.
The equipment destroyed by the rebels include five heavy trucks, a mini dump truck, one unit double cab, a unit grader, a unit mixer, a crane and one owner type jeep. /jpv