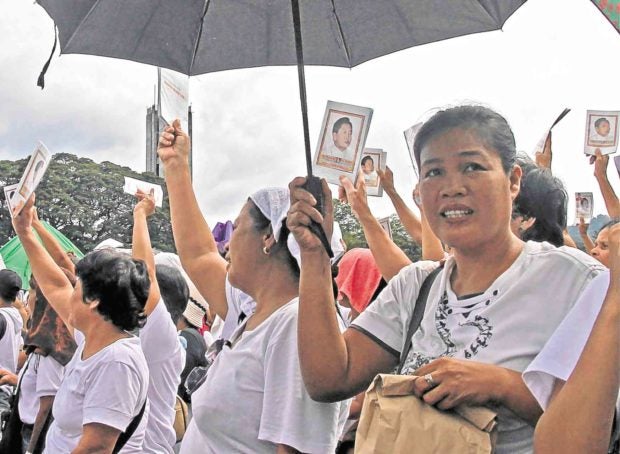 LOS BAÑOS, LAGUNA—The government is set to shut down the operations of a group that has promised people shares of supposed “quintillions” of pesos in Marcos wealth.

The group, One Social Family Credit Cooperative, has been found to hold office in a hut no bigger than a toilet in Trece Martires City in Cavite province.

A specialist of the Cooperative Development Authority (CDA) in Southern Tagalog said the CDA was set to issue a cease-and-desist order against One Social Family Credit Cooperative, which organized the assembly on the campus of the University of the Philippines Los Baños (UPLB) in Laguna province on Sept. 23 that drew thousands from neighboring provinces.

The CDA is the sole agency mandated to register all types of cooperatives. It is under the Office of the President.

Those who came to the UPLB gathering paid P30 for a pamphlet with a picture of the late strongman Ferdinand Marcos. They were promised up to P1 million from the so-called Marcos wealth. They also paid P10 each in registration fee.

“We are just waiting for the order from the central office,” Nelson Labio said in a phone interview on Thursday from the CDA extension office in Calamba City.

Chris Marvida of the CDA regional supervision unit said One Social Family was registered about two months ago as a credit cooperative, initially with 48 members.

Sitting on the credit cooperative’s board is Emmanuel Destura Jr., who during the Sept. 23 event introduced himself as the chair. Destura is referred to by members as “Red Dragon.”

According to the CDA, a credit cooperative should promote and undertake savings and lending services by generating a common pool of funds.

“Their objective and purposes did not (state) anything that has to do with Marcos wealth,” Marvida said.

On Monday, CDA personnel visited the credit cooperative’s office at a residential compound in Trece Martires.

On the issuance of the cease-and-desist order, Labio said what One Social Family did at UPLB was “beyond” its supposed function as a credit cooperative.

In an interview on Wednesday, Chancellor Fernando Sanchez Jr. said UPLB would create a committee to review its processes in hosting events on the campus.

“There’s some sort of overlap of functions [in the approval of the permit]. That one’s clear,” Sanchez said.

A certain Jeffrey S. Fortuna, who claimed to be the head of the credit cooperative’s national inspectorate or cooperative secretariat, wrote to UPLB requesting the use of the school’s field, according to the university.

“We were surprised by the sheer [number] of people that came in,” Sanchez said.

An employees’ union at UPLB took to task university officials for allowing One Social Family to use the campus for a “scam” and “pro-Marcos propaganda” event.

“Deceitfully packaged as a cooperative general assembly, the event turned out to be a public platform for pro-Marcos propaganda,” the union said in a statement on Monday.

It said the event simply exploited the poverty of those who came.

“Even worthier of indignation is the organizers’ dissemination of historical lies about the dictatorship as part of this ruse,” the union said.

Among those who showed up at the assembly were tricycle drivers, vegetable vendors, public school teachers and village officials.

In an interview after the program, the organizers’ “paymaster,” who wanted to be referred to only as “Pink Diamond,” said his group chose UPLB as a venue primarily because of its “large space.”

She said the date of the assembly was planned way ahead and it was just a “coincidence” that it fell in the same week after a massive antimartial law rally at Rizal Park in Manila.

“But as they say, there’s no such thing as coincidence,” Pink Diamond told the Inquirer.

Read Next
Sereno wants to grill witnesses against her
EDITORS' PICK
TECNO Mobile sparks up summer with fun livestreams, great prizes
ING Pay is the safe and reliable way to pay – here’s why
House-to-house COVID-19 testing pressed to get ‘true’ PH state
PGH seeks more plasma donors as it loses 5 patients to COVID-19 daily
Despite ‘red-tagging,’ community pantries rise to 350, says advocate
Smart is fastest 5G Network in PH – Ookla
MOST READ
PH military pouring naval, air assets near site of Chinese incursions in WPS
US adds 116 countries to its ‘Do Not Travel’ advisory list
PH-Canada labor agreement coming soon – DOLE
Ganging up on a good thing
Don't miss out on the latest news and information.