Robredo distances self from #Tindig Pilipinas 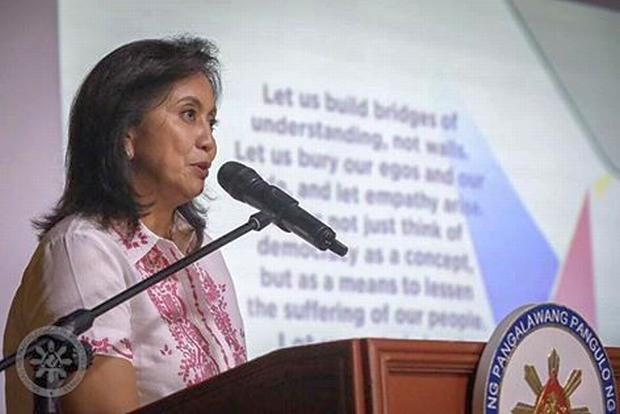 For the record, Vice President Leni Robredo does not belong to #TindigPilipinas, a multi-sector coalition that has called on President Duterte to sign bank secrecy waivers — or to resign otherwise.

Robredo, who chairs the Liberal Party, made the clarification after she appeared with opposition leaders identified with the group during the September 21 activities protesting extrajudicial killings and warning against the return of martial law.

“I am not part of Tindig Pilipinas. I was only invited along with those who are part of the fight against martial law before. That Mass was important because it was a commemoration of the long period of struggle,” she said in an interview in Naga City, a transcript of which was sent to Manila reporters.

“But I am not part of Tindig Pilipinas. I think it is better for groups like this to be organic and coming from ordinary citizens, without the meddling of politicians,” Robredo said in Filipino.

She said politicians engaging in such civilian-led movements would always cast suspicion on their motives.

“The moment politicians take part in that, it’s as though their intentions are tainted in doubt, and the discussion detracts from the true issue,” she said.

“Politicians like us will only adversely affect movements like this, because our intentions will be in doubt,” Robredo said.

The “Sign or Resign” call of #TindigPilipinas stems from Mr. Duterte’s own statement that he will resign if it is proven that he has bank deposits amounting to billions of pesos, as alleged by Sen. Antonio Trillanes IV.

Trillanes, a critic of the President, earlier alleged that Mr. Duterte had billions of pesos worth of bank transactions.

The President has disputed Trillanes’ allegations, but he has rejected the senator’s challenge for him to sign a new waiver to disclose the transaction history of his bank accounts.

Duterte said he already signed a waiver, which Trillanes rejected.

He has said Trillanes should not look to him for evidence.

In a statement, #TindigPilipinas said the President “cannot laugh off” the investigation of the Ombudsman, with the confirmation of Mr. Duterte’s “previously exposed bank accounts.”

“He cannot laugh this off, dissemble yet again, contradict himself as if this is an acceptable quirk of his character,” #TindigPilipinas said. “The question is very simple — Where did these billions come from?”

“You ran on a platform of anticorruption, anticrime and antidrugs. Now you need to explain in a clear, detailed and unequivocal way what are the sources of your wealth, when you earned each amounts and where the amounts are now,” the group said. /cbb