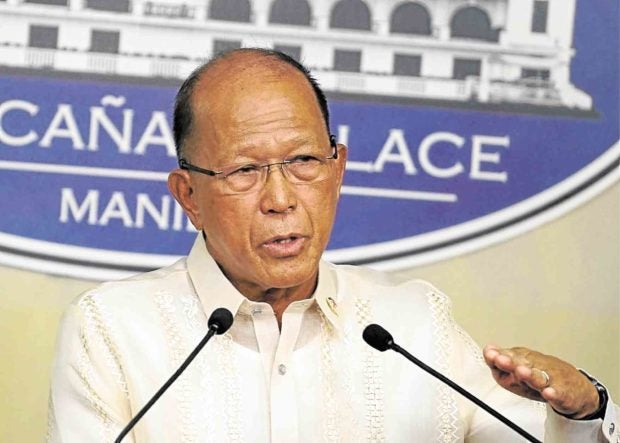 Speaking at the 120th anniversary of the Department of Justice, Mr. Duterte noted that Lorenzana lived in the United States for a long time.

Lorenzana served as the Philippines’ defense and armed forces attaché and then as a special presidential representative for veterans affairs in Washington from 2002 to 2016.

“He stayed in America for a long time. I know he’s a CIA agent,” Mr. Duterte said in jest in his speech at the Philippine International Convention Center in Pasay City.

“But that’s OK. I—the two of us would joke [with] each other—this is what you tell them (the Americans),” he added.

Since coming to power last year, Mr. Duterte has tried to steer the Philippines closer to China than to its traditional ally, the United States.

But despite the President’s overtures to China, the military and defense establishments are still largely seen as bastions of pro-US sentiment in the government.

Asked about the President’s ribbing, Lorenzana said: “That was meant to be just a joke—a supposed CIA agent. He started saying that as early as when we started last year.”

“That was because I stayed in DC for 14 years from 2002 [to] 2016. But all those years I was working at our embassy as a diplomat: first as the defense attaché and, after retirement from the Army, as veterans attaché,” he said.

“We [in] the Cabinet do not take those remarks by the President seriously and neither should you,” he said.

Mr. Duterte said he was mayor of Davao City when he first met Lorenzana.

“He brought in the Second (Scout) Ranger Battalion … and after that we became friends. I was impressed with him. When I was shopping for my Cabinet, I remembered him. He’s really honest and strict,” Mr. Duterte said.

As special presidential representative for veterans affairs at the Philippine Embassy in Washington from 2004 to 2015, Lorenzana took up the cause of Filipino veterans, particularly Filipino soldiers who served in the US Army in World War II, according to a profile of Lorenzana on the Department of Defense website.

His lobbying helped in the passage of the Filipino Veterans Equity Compensation Act of 2009, which provided US$198 million to surviving Filipino veterans of World War II.

Lorenzana also helped secure from the US Department of Veterans Affairs a total of $12 million worth of grants-in-aid for the Veterans Memorial Medical Center over a span of 12 years.

As defense and armed forces attaché from 2002 to 2004, he oversaw and monitored military relations between the Philippines and the United States on the Visiting Forces Agreement, military exercises, aid, training and foreign military sales.

In 2002, Lorenzana also helped develop the guidelines for the highly successful maneuvers between the Armed Forces of the Philippines and the US Pacific Command in Basilan.