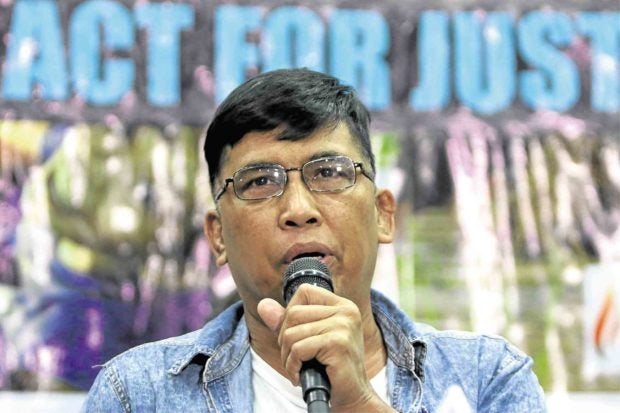 Taxi driver Tomas Bagcal should not be placed under the Witness Protection Program (WPP) “because he is not telling the truth,” Public Attorney’s Office (PAO) Chief Persida Rueda-Acosta said Wednesday

Acosta, counsel for the family of victims Carl Angelo Arnaiz and Reynaldo “Kulot” De Guzman said Bagcal is not a credible witness after changing his testimony five times

“Real witnesses, no matter where the court is, no matter he is and when, he will testify and what he will say will not change at all,” the PAO chief stressed.

At the NBI, Bagcal said Arnaiz used a knife and was with Kulot during the robbery. He earlier said Arnaiz was alone and had used a gun.

Acosta maintained that Bagcal is a co-conspirator of the Caloocan policemen.

“He is a co-conspirator in this case because he legitimized the defense of the policemen that the teenagers killed were holdup robbers. There is a conspiracy here,” she explained.

Acosta said only the eyewitness identified as alias “Daniel” who pointed to probers the site where Carl Angelo was killed by police in C-3 Road in Caloocan should be placed under WPP coverage.

In his affidavit, the witness said he saw police drag Carl Angelo out of a police patrol car and ordered to kneel on a grassy area. Holding up his bound wrists, the man pleaded that he was surrendering – “susuko na po ako” – but he was shot dead by two policemen.

Bagcal was included as a respondent in the complaint against Caloocan Police PO1 Ricky Arquilita and PO1 Jeffrey Perez for double murder, torture and planting of evidence under Republic Act 10591 (Comprehensive Firearms and Ammunition Regulation Act) and R.A. 9165 (Comprehensive Dangerous Drugs Act). /je