Marawi siege will be over in 3 days, Lorenzana tells House panel 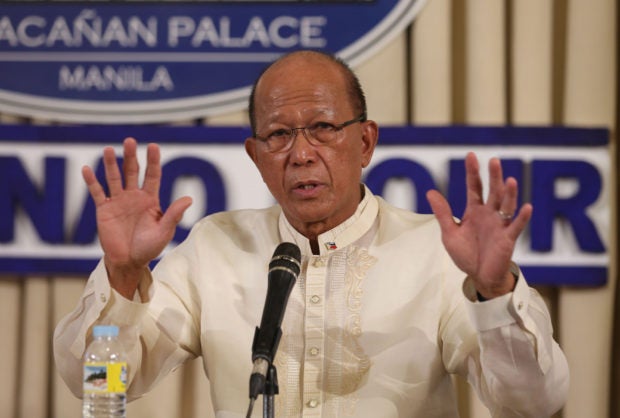 Defense Secretary Delfin Lorenzana on Wednesday said government troops might be able to retake devastated Marawi City in three days, after having been under siege by Islamic State-inspired terrorists since May 23.

“It could be over at the end of this month,” Lorenzana said.

“That’s what the people on the ground told me,” he told reporters later in an ambush interview. “So I trust them… They were the ones who told us matatapos na sa katapusan.”

READ: Marawi siege to end in less than a month — AFP

It was not the first time the defense secretary had set time frame for the resolution of the Marawi siege. But previous target dates were revised until the government gave up trying to set a date.

Lorenzana said it would still be up to President Rodrigo Duterte to decide whether or not to lift martial law in Mindanao, which Congress approved to be extended until the end of the year.

“The decision to lift martial earlier, or wait until it [lapses] on December 31, rests solely with the President,” Lorenzana said. “The President knows what’s going on the ground… The decision will be very easy for him.”

He raised the possibility of reconstructing Marawi with martial law still in effect.

“I will reconsider the recommendation of people in Marawi and in Lanao [del Sur], which is if they want martial law to continue while we are rehabilitating their area,” Lorenzana said.

He said there were 6,500 government troops in Marawi, where only 100 terrorists remain.

He said the clearing operations had already started, while post-conflict needs assessment would start on Oct. 1, taking from up to two weeks to finish.

“After that, we’ll get a good idea of how much we need to rehabilitate Marawi City,” Lorenzana said.

During the House hearing, Lorenzana was confronted with an emotional plea from Tawi Tawi Rep. Ruby Sahali, who expressed fears that the Marawi incident might derail the passage of the Bangsamoro Basic Law (BBL).

“We don’t want a repeat of the BBL in 2014 because of what happened to Mamasapano,” she added. “The [circumstances] are very much different, but we don’t want this war in Marawi to kill the BBL 2017.”

Sahali said she would have wanted the siege in Marawi to translate into support for the new BBL.

Lorenzana said he understood Sahali’s position and considered her feelings about the Bangsamoro bill “valid.”