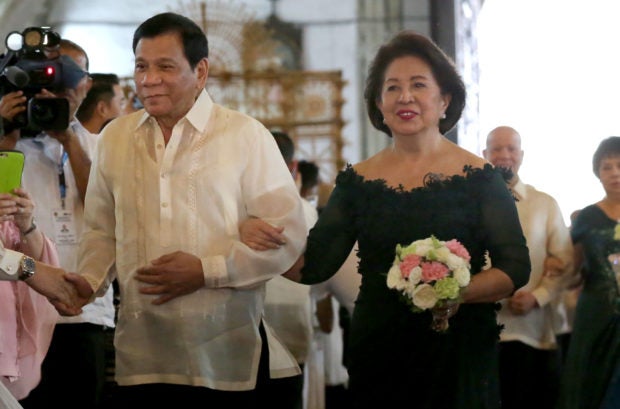 President Duterte and Ombudsman Conchita Carpio Morales are shown as wedding sponsors in this file photo.

Acting on the complaint of Sen. Antonio Trillanes IV, the Office of the Ombudsman is looking into President Duterte’s wealth that allegedly amounts to billions of pesos.

Trillanes first alleged that Mr. Duterte and his family had amassed so much wealth during the presidential campaign last year.

Mr. Duterte has denied all of Trillanes’ claims, saying his family did not have such wealth.

Speaking at the 120th anniversary celebration of the Department of Justice at the Philippine International Convention Center in Pasay City on Tuesday night, Mr. Duterte reiterated that his wealth came from the sale of real estate inherited from his father, the late former Davao Gov. Vicente Duterte.

As a result of the sale of the inherited property, Mr. Duterte said he already had P1 million even when he was still a student.

Mr. Duterte said in Davao on Friday that he already had P3 million when he was still a fourth-year student as a result of the sale of his father’s property by him and his siblings.

In his speech on Tuesday night, he said he was authorizing “everybody” to look into his account in Union Bank.

“You’d find there that even when [I was] still in fourth year, I had a million already. That’s the truth,” he said.

Overall Deputy Ombudsman Arthur Carandang said on Tuesday that his office had approved the request of the Deputy Ombudsman for Mindanao to obtain the Anti-Money Laundering Council (AMLC) final report on the Duterte family’s bank transaction records when Mr. Duterte was mayor of Davao City.

“It was Senator Trillanes who filed the complaint with us and attached the documents. The office, when it evaluated the complaint, recommended the conduct of a fact-finding [investigation],” Carandang said.

“Just recently, the ones conducting the fact-finding [wrote my office] that a request be made to AMLC again … for the final report, if there is any. We attached the complaint of Senator Trillanes and (his) attachments to our AMLC request. That was last month,” he said.

In a separate interview, Ombudsman Conchita Carpio Morales said she had authorized Carandang to “handle the cases involving” the Duterte family.

“I have full trust in his (Carandang’s) impartiality,” she said.

Morales has inhibited herself from acting on any case filed against the Duterte family. “That is documented,” she said of her inhibition.

Carandang said that his office had received the bank transaction records but not AMLC’s final investigation report.

“We can confirm that we received bank transactions coming from AMLC, generated by AMLC for intelligence purposes,” he said.

Carandang explained that the Office of the Ombudsman and the AMLC were sharing information on flagged bank transactions.

He said the AMLC could establish bank account details, such as when the accounts were opened, who made the deposits and withdrawals, and how much because the banks would be compelled to report to the council.

A corruption allegation could be matched with the supposed transactions, he said.

“If Senator Trillanes’ complaint mentions illegal activities, with particular dates, then these could be matched with the transaction records, if there was (money) deposited in their accounts or not,” Carandang said.

After the bank transactions are generated, the AMLC conducts a bank inquiry if there is a “predicate crime that would trigger [it],” he said.

Carandang said the complaint of Trillanes was sufficient for AMLC to make the bank inquiry.

The President and his family can always defend themselves and explain the source of the money reflected in the transaction records obtained by AMLC, according to the overall deputy ombudsman.

Asked if the documents he had received from AMLC were the same as the ones Trillanes had submitted, Carandang said he “cannot confirm” it just yet.

“But more or less, they have the same details,” he said.

The senator has shown bank transaction records of the President, his common-law wife, Cielito “Honeylet” Avanceña, former wife, Elizabeth Zimmerman, and his four children, dating as far back as 2004.

Because of Mr. Duterte’s immunity as President, he can only be investigated for purposes of initiating an impeachment complaint.

Trillanes has claimed that Mr. Duterte had P2.2 billion worth of transactions in three bank branches from 2006 to 2015.

Carandang said the bank transaction records of the Duterte family that he received from AMLC did not include a total amount, which was why it was difficult to say offhand how much exactly each family member owned.

If one adds just the flow of money, or the transactions made through all those years as reflected in the bank transaction records, it could total to more than a billion pesos, he said.

Carandang emphasized that the AMLC final report was just as crucial to any result of the investigation done by his office, through the Office of the Deputy Ombudsman for Mindanao.

He also said that the Office of the Deputy Ombudsman for Mindanao had actually investigated Mr. Duterte last year before the presidential campaign.

The investigation was based on the statement of assets, liabilities and net worth of then Mayor Duterte.

Nothing came out of the investigation, Carandang said.