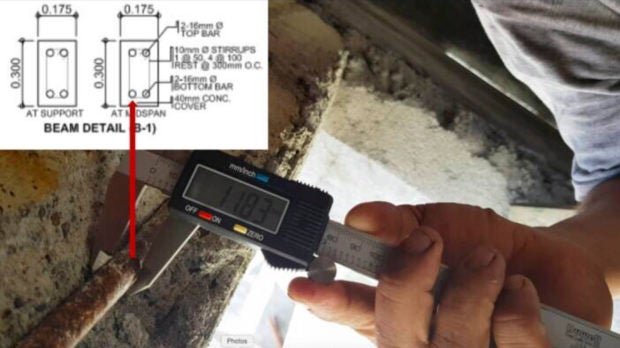 Photo courtesy of the House Committee on Housing and Urban Development

Perjury and even possible syndicated estafa charges may be filed by lawmakers against a contractor in housing projects for victims of Supertyphoon “Yolanda” (international name: Haiyan) in Eastern Samar, after an inspection last week showed the steel bars used by the contractor fell short of government specifications.

Negros Occidental Rep. Albee Benitez, chair of the House of Representatives’ housing and urban development committee, said at a press briefing on Tuesday that contractor Juanito Tayag of JC Tayag Builders Inc., “definitely committed perjury” when he denied in a Sept. 18 hearing that substandard materials were used in the resettlement sites.

Benitez said an inspection conducted after the hearing showed the reinforcing steel bars used by JC Tayag fell short of the 16 millimeters specified by the National Housing Authority (NHA).

Ilocos Sur Rep. Deogracias Victor Savellano recalled that he made Tayag testify under oath during the Sept. 18 hearing.

Tayag on Tuesday insisted that the materials were not substandard, contrary to the claim of whistle-blower Camilo Salazar.

He said the claim had “damaged the reputation” of his company.

Tayag said he regarded the findings of Benitez’s committee as important because he needed to “save the company” he “worked hard to build.”

Tayag said Salazar was not a licensed engineer and was fired when the group of workers he supervised did not follow the housing design in a project in Balangiga, Eastern Samar.

He said receipts and results of material testing showed that his company did not use 8-mm rebars, as claimed by Salazar.

He said the syndicated estafa angle was “being studied,” because the undersizing of the rebars resulted in a 30 to 40-percent price difference.

NHA officials responsible for the projects may also be held liable for negligence, Benitez said.

“We were wondering how this can happen without the monitoring and supervision of NHA officials,” he said.

Benitez and Eastern Samar Rep. Ben Evardone, who authored House Resolution No. 599 that triggered the congressional inquiry, may file the criminal complaints in their personal capacities.

Benitez added that the House’s investigation would be expanded to cover Yolanda housing projects handled by other contractors.

Evardone urged the NHA and the Department of Public Works and Highways (DPWH) to conduct a joint investigation and testing of construction materials.

“I want to make sure the units that will be occupied or are occupied already are really suitable for the victims of Yolanda,” he said.

He noted that the houses built with substandard materials are already a sunk cost, because the DPWH’s standard procedure is to “remove and replace” such infrastructure.

During last week’s hearing, Tayag lamented that lawmakers took the allegations of Salazar about the use of substandard materials as “gospel truth.”

“The alleged substandard issue only happened in one of our project sites in Balangiga,” Tayag said then.

“However, they declared the construction in Eastern Samar as a whole substandard. Standard logical principle does not agree that a particular fact can form a general statement. That is malicious,” he said.

He claimed Salazar was a foreman who was relieved over the poor implementation of works and plans.

In response, Benitez said Tayag could not present payment slips during the hearing and only showed a billing statement claiming payment.

“How can a salaried person or foreman bill his employer?” he said.

On Tuesday, Tayag said in a statement to the committee that NHA engineers were “very, very diligent and meticulous enough in the inspection of the quality of the materials delivered to the project sites.”

He said it was not true that his company had cornered 80 percent of housing projects in Eastern Samar.

Tayag asked the committee to clear his company’s name.

“The bad publicity over this issue tarnished the reputation of our company,” he said.

“The bad publicity impressed on the minds of the Filipino people that JC Tayag Builders Inc. entered into a fishy contract with NHA [and that it was] inefficient,” he said.

He added that the damage to his company was “irreparable.”

According to Tayag, the NHA notified him to proceed with the project in February 2016.

He attributed the delays in the implementation of the project to some changes in the massive earth-moving operations that arose from land boundary errors and illegal claimants.

Tayag also cited shortage of workers, as the government embarked on housing projects in 171 towns in 54 provinces.

Due to lack of gravel, sand and soil, JC Tayag had to haul road-building materials from supply sites 150 kilometers from the project sites, he said.

Construction was also hampered by rain, he added.

Tayag denied his company subcontracted parts of the project.

“The company directly called the shots in the operations,” he said.

Explaining why he took on the project, he said few contractors were interested to work in Eastern Samar because of the difficulty in obtaining materials and the distance.