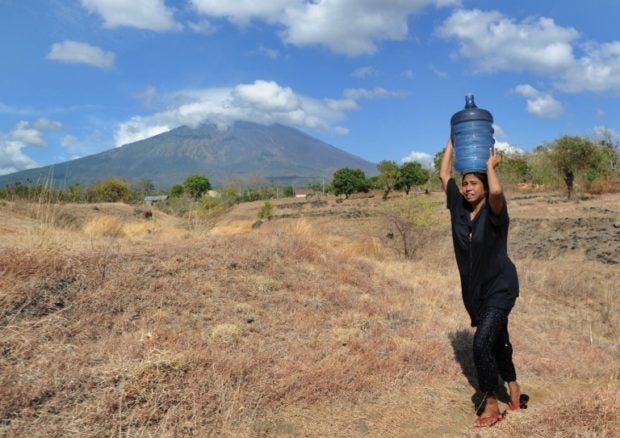 A woman carries water on her head in the Kubu subdistrict of Karangasem Regency on the Indonesian resort island of Bali on September 26, 2017, as Mount Agung volcano looms in the background.
More than 57,000 people have fled a volcano on the tourist island of Bali as rising magma and increased tremors fuel fears of an imminent eruption, officials said on September 26. AFP

KARANGASEM, Indonesia—More than 57,000 people have fled a volcano on the tourist island of Bali as rising magma and increased tremors fuel fears of an imminent eruption, officials said Tuesday.

Mount Agung, about 75 kilometers (47 miles) from the Indonesian tourist hub of Kuta, has been rumbling since August, threatening to erupt for the first time since 1963.

“The chance that an eruption will happen is quite big. But it cannot be predicted when it will happen,” spokesman for the disaster mitigation agency Sutopo Purwo Nugroho said.

An increased frequency of tremors from the volcano shows the magma continues to move towards the surface, the spokesman said.

The Indonesian Center for Volcanology and Geological Hazard Mitigation said there has been an increase in volcanic tremors, with a total of 564 recorded Monday.

Officials announced the highest possible alert level on Friday due to the increasing volcanic activity, and told people to stay at least nine kilometers away from the crater.

Evacuees have packed into temporary shelters or moved in with relatives. The disaster mitigation agency recorded about 62,000 people live in the dangerous zone.

Some 2,000 cows have also been evacuated from the flanks of the volcano.

“Our preparedness will be the key for the mitigations of volcanic risks,” Devy Kamil, a senior official at Indonesia’s Center for Volcanology and Geological Hazard Mitigation, told Agence France-Presse.

The airport in Bali’s capital Denpasar, through which millions of foreign tourists pass every year, has not been affected, but several countries such as Australia and Singapore have put out a travel advisory.