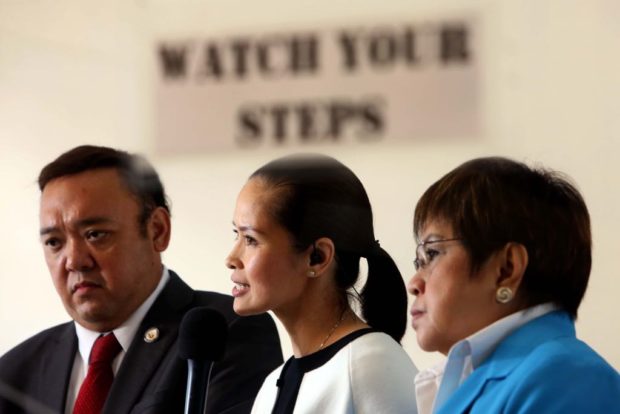 The estranged wife of Commission on Elections (Comelec) Chairman Andres Bautista on Tuesday filed a disbarment complaint before the Supreme Court against University of Santo Tomas Faculty of Civil Law Dean Nilo Divina and 20 others.

She accused them of violating the Code of Professional Responsibility.

“We are doing what we said we will do which is to use other avenues and other venues to allow these documents to come to light,” Patricia “Tish” Bautista told reporters after she filed the complaint at the Supreme Court.

She was referring to documentary evidence allegedly proving that her husband had amassed some P1 billion in ill-gotten wealth.

Patricia filed the complaint after the impeachment complaint against her husband was dismissed by the House of Representatives.

She had earlier accused Divina of illegally giving commissions to the Comelec chief for endorsing clients to Divina’s law firm, among them Smartmatic, the poll body’s technology provider in the last three automated elections.

Patricia said Divina, who was also being questioned for the hazing death of UST freshman law student Horacio Castillo III, and his law partners were “members who deserve to be weeded out.”

Sought for comment, Divina chose to play down Patricia’s allegations, saying the disbarment complaint was prompted by the decision of the House of Representatives to junk the impeachment complaint against the Comelec chief.

“We have always acted in accordance with law and the ethical demands of the law profession… I am not worried at all about any threat of disbarment,” Divina said in a text message to reporters.

“They are probably sour that their impeachment complaint was dismissed,” he said. /cbb /atm