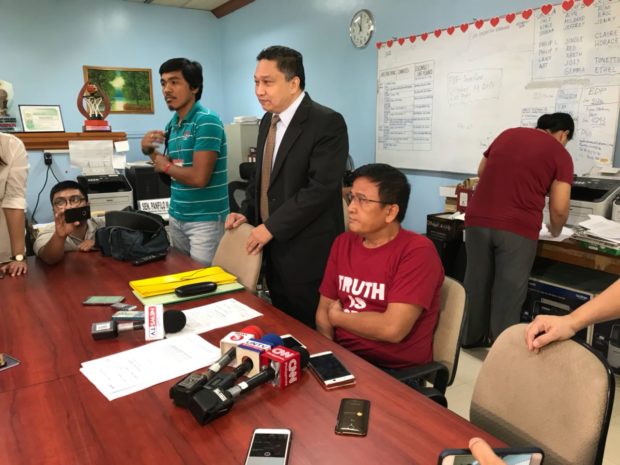 Former Bureau of Customs (BOC) chief Nicanor Faeldon is asking the Senate committee on ethics and privileges to either suspend or expel Sen. Antonio Trillanes IV for accusing him of being “at the heart of the controversy” over the P6.4-billion worth of “shabu” (crystal meth) smuggled into the country from China.

Faeldon was allowed on Monday to briefly leave his detention quarters at the Senate to file an ethics complaint against Trillanes.

He has been detained for two weeks now for refusing to testify at the blue ribbon committee hearing on the illegal shipment that slipped past the bureau in May.

For his part, Trillanes said he would face the complaint filed against him squarely.

“I believe that I did not do anything to warrant such a case. I will also not allow it to divert the focus from the real issue, that the mastermind behind the P6.4-billion shabu shipment is Mr. Paolo Duterte,” Trillanes said.

In his ethics complaint, Faeldon said Trillanes had attempted to bully and abuse him in one of the hearings on the illegal shipment when he initially refused to answer the senator’s questions.

“Senator Trillanes could not even provide basic material particulars in so far as his false, malicious and categorical conclusions of [my] complicity much less direct participation in the smuggling of the P6.4 billion worth of shabu,” he said in the complaint.

In a statement read by his lawyer Jose Diño Jr., Faeldon dared Trillanes to prove before the ethics committee his allegations that he was at the center of the drug smuggling and the link of the “Davao Group” to the younger Duterte.

Faeldon also dared Sen. Panfilo Lacson to file cases against him in court every day, saying the senator had become “obsessed” with him after he started investigating the alleged cement smuggling activities of the senator’s son.

Over the weekend, Lacson disclosed his plan to file rice smuggling and economic sabotage cases against Faeldon this week, noting that as commissioner, he was the only one who could order the release of smuggled rice.

When sought for reaction, Faeldon said he welcomed the filing of such cases in court, where he could face him instead of answering the allegations in the Senate.

Lacson had delivered a privilege speech accusing Faeldon as the leading Customs official benefiting from the “tara” or payola system at the bureau.

Faeldon on Monday said that he never denied that there was a payola system in the BOC. “But saying that I’m part of it, that’s really bullshit,” he said.