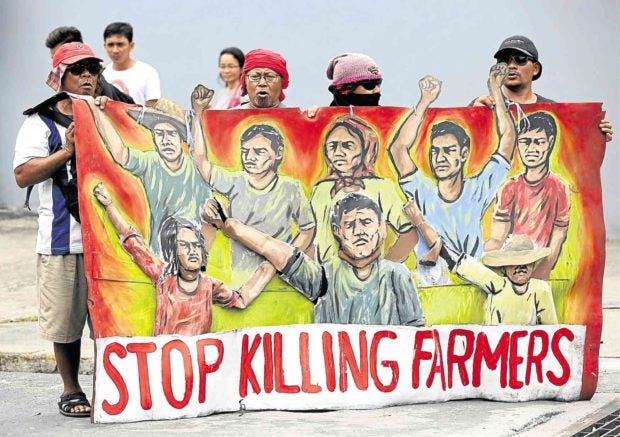 Protesters rally outside the Armed Forces headquarters in Camp Aguinaldo in May to denounce the unsolved killings of farmers. —LYN RILLON

ILOILO CITY — Farmers given titles to a 198-hectare parcel of land in Capiz province are fighting the downgrade of charges filed against suspects in the killing of a colleague seven months ago when the farmers tried to occupy the land awarded to them.

The killing of farmer Orlando Eslana in February arose from a confrontation between the farmers occupying the land awarded to them, which used to be part of an estate, and a group of estate caretakers and village officials.

The farmers filed a 22-page petition at the Capiz provincial prosecutor’s office questioning a resolution that reduced the charge against accused Leopoldo Lachica, an estate caretaker, to homicide for the killing of Eslana.

The police force of President Roxas town, which conducted the investigation, had filed a murder case.

The prosecutor’s office also reduced the case for the wounding of Melinda Aquino, another farmer beneficiary, to frustrated homicide from the frustrated murder filed by police.

The prosecutor’s office, in the June 5 resolution, also indicted Jon Manuel Bacanto and Morito Vega for serious physical injuries for the wounding of farmer Nida Amo.

In the same resolution, the criminal complaint against Ferdinand Bacanto, chief of Barangay Culilang, where part of the estate is located and the estate’s administrator, and three other suspects.

Lawyer Maria Cecilia Maquirang, who represents the farmers, said Bacanto, being the administrator of the estate, should be among those charged criminally as he gave orders during the clash between the farmers and estate workers.

She said murder and frustrated murder cases should had been filed because the shooting death of Eslana was done with treachery and premeditation.

The case was in connection with the Feb. 11 clash between the farmers and a group led by Bacanto five days after 60 farmers occupied three hectares of the 198-hectare area covered by their certificates of land ownership award (Cloa). The estate was owned by Nemesio Tan and his heirs.

Cloa is a document issued by the Department of Agrarian Reform (DAR) delineating land for beneficiaries of the agrarian reform program.

The farmers decided to occupy part of the 198-hectare land after the DAR failed to install them 19 years after issuing the Cloas.

During the clash, Eslana was shot dead and four other farmers were wounded. A relative of Bacanto, the main suspect, was also wounded.

In a previous interview, Bacanto said the farmers started the clash when Eslana tried to hack Lachica with a bolo but instead wounded Lachica’s daughter, Jesery. Bacanto claimed he did not see who shot the farmers.

Bacanto also said the farmers were occupying the land illegally as its coverage by the land reform program was stopped by an injunction issued by the Capiz Regional Trial Court on July 20, 2000.

Rafael Mariano, during his brief tenure as agrarian reform secretary, issued an order on May 15 prohibiting administrators of land covered by agrarian reform from evicting farmers occupying the land.

Mariano, who was rejected by the Commission on Appointments, had ordered police and the military to protect the farmers in the Tan estate.

The farmers now fear eviction after Mariano was ousted by the appointments body.