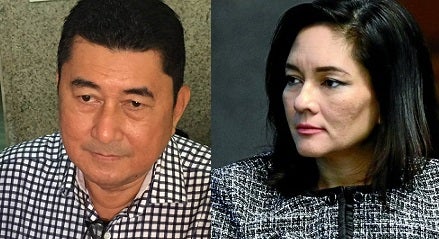 Paras filed the complaint against Hontiveros for allegedly taking custody of minors who are witnesses in the case of 17-year-old Kian Delos Santos, a suspected drug runner killed in an alleged shoot-out with police.

A CCTV video later surfaced showing the police had custody of Delos Santos before he was killed. The minor became the face of police abuses in the administration’s war on drugs.

Hontiveros’ wiretapping complaint meanwhile stemmed from her privilege speech where she showed a photo of a supposed exchange of text messages between Paras and Justice Secretary Vitaliano Aguirre on hatching a plan to file cases against the senator.

In an interview after the filing, Paras said he filed the complaint in response to a challenge posed by the senator.

“Since she challenged us to file a case, pinag-aralan namin,” Paras said.

In the complaint, Hontiveros is accused of kidnapping for taking custody of three minors who are supposed witnesses — aged 13, nine, and six — in the Delos Santos slay.

Hontiveros is accused of kidnapping for allegedly convincing the minors to abandon the home of their parents to an undisclosed location without informing authorities.

“It is also very clear that she kept custody of these children from the period of Aug. 19, 2017 to Sept. 3, 2017 and turned over to the Senate custody only on Sept. 4, 2017 to testify in the Senate investigation, and then again took control and custody of the minors after said Senate hearing and placed them in the care of a certain Bishop Pablo David,” the complaint read.

The complaint cited the Anti-Wiretapping law or Republic Act 4200, which reads “It shall be unlawful for any person, not being authorized by all the parties to any private communication or spoken word, to tap any wire or cable, or by using an other device or arrangement, to secretly overheard, intercept or record such communication…”

Hontiveros may also be liable for obstruction of justice for allegedly refusing to turn over the 13-year-old minor to the Public Attorney’s Office (PAO) and the National Bureau of Investigation (NBI) conducting an investigation.

Despite a letter from PAO requesting the Senate to turn over the custody, Hontiveros allegedly “refused to turn over the witness… to PAO and NBI in the interest of justice and in carrying the purpose of solving a murder perpetrated on Kian Delos Santos,” the complaint read.

“Her refusal is an act which constitutes obstruction of justice, committed by means of preventing witnesses from testifying in any criminal proceeding,” the complaint read.

“It is pretty obvious that her refusal to turn over the witnesses to PAO and DOJ was motivated by politics with the sheer purpose of using the witness as a tool in her propaganda against her political enemies,” it added. /cbb, je