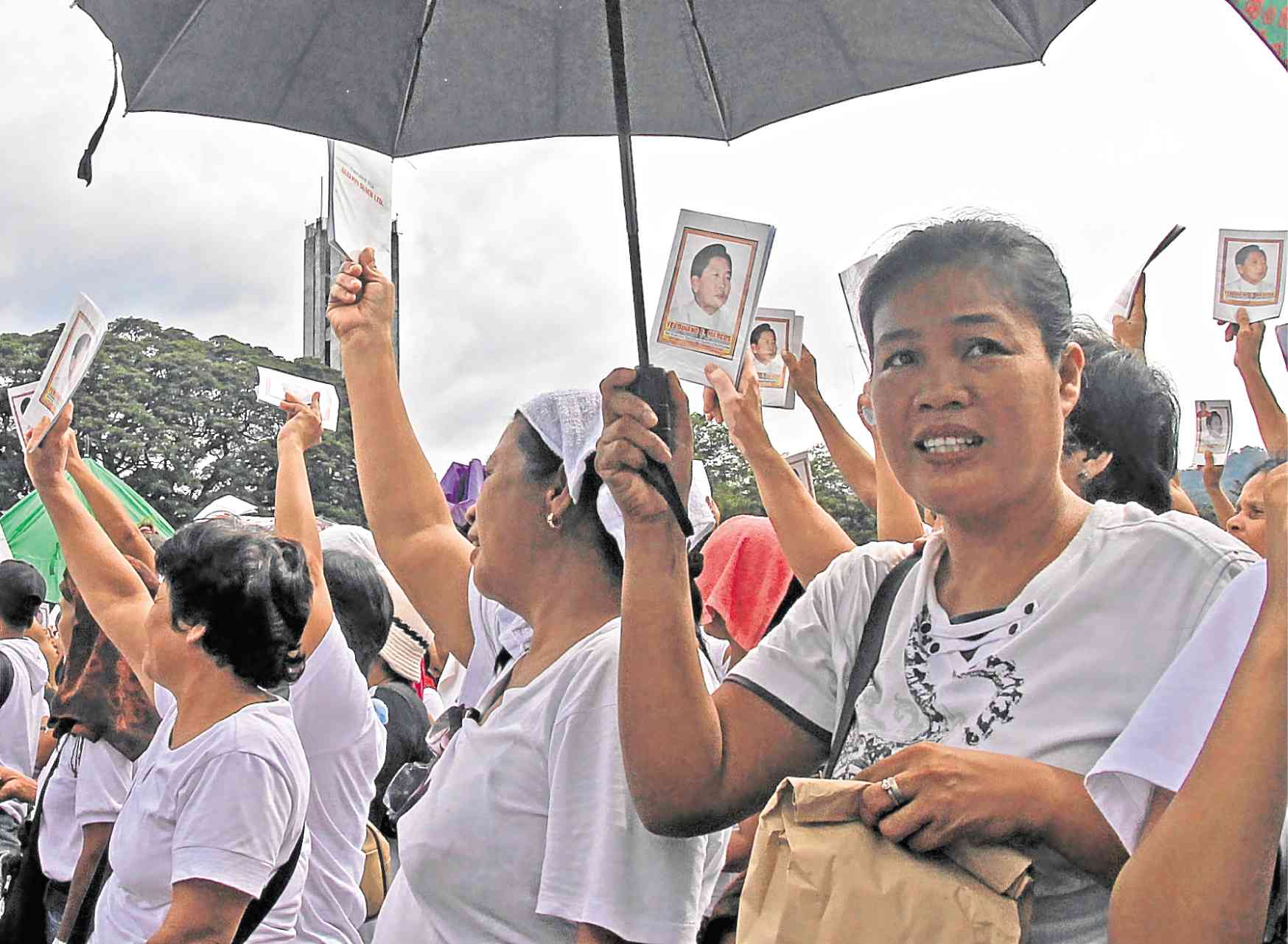 (Editor’s note: The writer is a researcher at the Third World Studies Center in the University of the Philippines Diliman. His article is based on a paper he presented at the opening of “The Remains of a Dictatorship: An International Conference on the Philippines under Marcos” in August. Vera Files is put out by journalists taking a deeper look at current issues.)

How was a group of supporters of the late dictator Ferdinand Marcos able to gather on Saturday thousands of people on the campus of the University of the Philippines Los Baños (UPLB) in Laguna province?

Sept. 23 happened to be the 45th anniversary of Marcos’ actual declaration of martial law.

The attendees had been recruited into buying a pamphlet for P30 at meetings that turned into a program that extolled Marcos’ accomplishments.

They came to the UPLB campus in the hopes of collecting P10,000 every month for the next four years as their share of the “Marcos wealth,” with the pamphlet as proof of their claim.

Behind the pamphlet was an organization that had been discredited by the Securities and Exchange Commission (SEC) and whose leaders the National Bureau of Investigation charged with estafa in 2013.

So what was the gathering about? Was there a hidden hand or a hidden agenda that set the event in motion?

To find answers to these questions, I go back to my hometown and to a story that my mother told me about how the group of Marcos supporters recruited people to a scheme that promised them P1 million each from the Marcos wealth.

In the first week of December 2016, my mother attended a Christmas party at a beach resort in our town in Sorsogon province.

Taking place at the resort was a bigger gathering of about 100 people.

Shortly before noon, someone from that group began praying over the loud speaker, prompting my mother to think that it was an evangelical event.

But then the national anthem was played, signaling the start of a formal program. It was the next song, however, that jolted my mother’s memory: “Hymn of the New Society.”

She knew the lyrics. My mother, 70 and widowed, said she used to hear it all the time over the radio during the martial law years.

After singing the hymn, she said, speakers started praising the life and accomplishments of Marcos, talking about how the country did so much better during martial law.

Through a friend who attended that program, my mother would learn that the speakers ended the event by convincing the crowd to provide their personal information and buy a pamphlet.

The speakers said that Marcos had bequeathed his wealth to the Filipino people and that the Marcos family was planning to honor his will. But the wealth could not simply be distributed to anyone. Each person’s identity has to be verified.

So the people were told to fill out personal information forms and to submit copies of their voter’s ID, birth certificate, marriage certificate, driver’s license, or any document that could prove who they were.

With the pamphlet and their verified personal information, they would be entitled to an outright grant of P50,000.

Those gathered at the resort were asked to refer others to the scheme. Coordinators handled the filling out of forms, the sale of the pamphlets and the gathering of photocopies of the required documents.

My mother later learned that the group that organized the event went by the name Bullion Buyer Ltd (BBL).

I eventually got hold of the pamphlet that belonged to my mother’s friend, who lent it to me with a caveat that should the promise of a bounty be true, I was to return it and we would split the amount.

She herself was quite sure now that it was a scam, but she spent a mere P30 on it anyway.

On the cover of the 30-page pamphlet is a portrait of Marcos in full color. The first page bears its supposed title, “Life and Achievements of Ferdinand E. Marcos, President of the Republic of the Philippines (1965-1986).” On the back cover is a copyright claim: Bullion Buyer Ltd, copyright 2016.

BBL claims that it was established in 2004 and that it “has about 3,100 officers and participating leaders nationwide.” It claims to have the objective “of creating one social family and brotherhood of hearts.”

The organizer of the UPLB gathering is called One Social Family Credit Cooperative.

What “one social family” means can be gleaned from BBL’s mission statement: “The ‘family’ being the unit of government will be strengthened by providing them the Livelihood and Investment program through the cooperatives … intended to promote the ‘self-reliance’ as embodied in the Letter of Instruction of President Ferdinand E. Marcos, as his ‘Immortal Legacy’ to his beloved countrymen.”

According to one former member, BBL’s founding date is Sept. 11, 2011, Marcos’ birthday. The first organizational meeting was held at Max’s restaurant in Parañaque City. Imelda Marcos was supposed to have graced the occasion had a typhoon not stood in her path.

There is an online video clip of the meeting where two persons spoke. They were identified as “Red Dragon” and “Pink Diamond,” supposedly the pseudonyms of founders Emmanuel Destura and Felicisima Cantos.

Destura and Cantos went into hiding after a charge of syndicated estafa was filed against them in 2013. Destura is said to be a son of Pedro Destura, a mayor of Prieto Diaz, Sorsogon province, from 1969 to 1971.

The younger Destura claimed that Marcos entrusted to his father a still-undetermined tonnage of gold deposits in Switzerland.

He surfaced in Los Baños on Saturday, this time identifying himself as the chair of One Social Family Credit Cooperative.

The presence of BBL in various parts of the country prodded the SEC to issue an advisory on April 6, warning local government authorities that the company was unregistered and that its modus operandi violated the Securities Regulation Code.

From the syndicated estafa charge sheet, it appears that the group’s modus operandi is straightforward. The initial recruits, called participating leaders, were tasked with organizing events in different localities in the country.

They also had to pay the organization P2,000. They were told they would be prioritized once the Marcos wealth was distributed. In exchange for their contribution, they would first receive P1 million and then 30 days later, $1 million.

Not one participating leader was ever paid a centavo, much less the millions of pesos and dollars promised. Some of these disaffected leaders brought the charge of syndicated estafa against the BBL leaders in 2013.

The sale of the Marcos pamphlet is a recent addition to the modus operandi and may have shifted the dynamics within BBL.

The participating leaders may have managed to find a way to recoup their contribution while waiting for the millions of pesos and dollars supposedly due them by selling the pamphlet.

When did the pamphlet become part of the package? The answer, drawn from the pamphlet itself, would be after Rodrigo Duterte became the President.

The preface in the pamphlet says, “Can we blame President Marcos in declaring martial law? He only needs peace of mind in the same manner as President Duterte so that he can do all his good plans for the Filipino people.”

“Can we now blame President Duterte if he declares martial law . . . if that is the only way in order to achieve peace, unity and prosperity,” the pamphlet adds.

Coincidentally, Mr. Duterte announced less than a month ago that the Marcoses were willing to return the wealth that belonged to the Filipino people.

Former Sen. Ferdinand “Bongbong” Marcos Jr. has distanced his family from BBL, denying any involvement in the gathering at UPLB which he called “a scam.”

So what does that UPLB gathering have to do with anything? In 2004, unnamed publishers reworked an undated compendium of Marcos propaganda titled, “Let the Marcos Truth Prevail.”

The 2004 publication, which bore the same title, was 855 pages long and distributed for free to public schools and universities.

In the online catalogs of some universities, the bibliographic entry for the book cites Imelda Marcos as the author.

Authorship can only be inferred, as the book has neither an author nor an editor. And as is common in Marcos propaganda material, there is neither date of publication nor publisher.

But it contains scanned copies of Imelda’s checks as a widow of a war veteran, material that cannot be found in public records.

The check suggests that the Marcoses had direct knowledge of the compiling and publishing of “Let the Marcos Truth Prevail.”

The BBL pamphlet is an abridged version of this compendium.

Pages 5 and 6 of the pamphlet mention Marcos’ record of military service and the honors he received, many of which have been proven to be mere fabrications.

The entry is a retyped version of a March 4, 1996, certification from the Armed Forces of the Philippines regarding Marcos’s military service.

The AFP certification in both the pamphlet and the compendium resurfaced in the most unlikely of documents: the submission to the Supreme Court of Solicitor General Jose Calida arguing for the burial of Marcos at Libingan ng mga Bayani.

Calida did not bother to get another certification from the AFP regarding Marcos’ military record; neither did he have it authenticated.

He merely submitted a photocopy of a page from “Let the Marcos Truth Prevail.”

What we have then are replications of texts that carry the untruths of the Marcoses. In each replication, the Marcos myth is passed on. BBL and its new iteration, One Social Family Credit Cooperative, are instances of trafficking in historical fraud.

Through the pamphlet, Filipinos, often the poorest among us, are induced to buy into the Marcos propaganda. In Calida’s case, fraud, like Marcos being the recipient of so many war medals, has found its way into our jurisprudence—a Marcos myth attempting to pass itself off as fact. —CONTRIBUTED