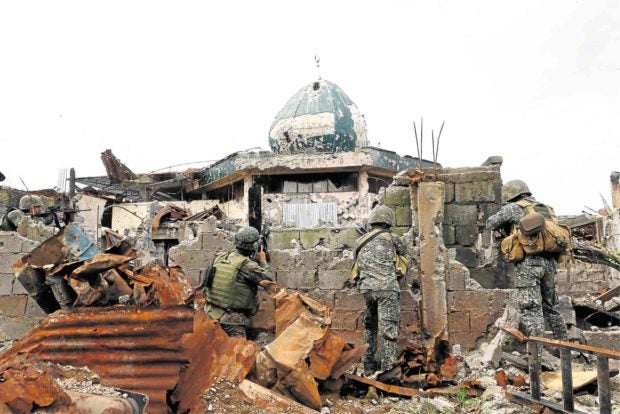 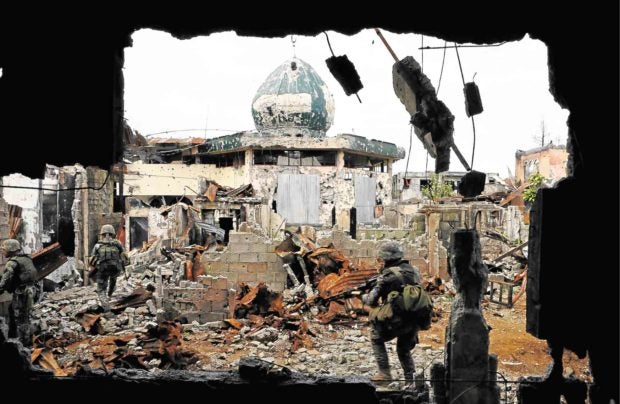 Clearing operations brought Marines closer to a mosque used by terrorists as a hiding place in Marawi City as other Marines take cover (top photo) in the ruins of a structure where the IS criminals operated before they were bombed. —PHOTOS BY JEOFFREY MAITEM

MARAWI CITY — Government soldiers on Saturday took control of another bridge, a terrorist position, in their continuing battle to finish off remnants of homegrown Islamic State (IS) affiliates who tried to set up an IS province in this predominantly Muslim city.

Col. Romeo Brawner, Joint Task Group Marawi deputy commander, on Sunday said that top military officials had crossed the Masiu Bridge after it was cleared by members of the Philippine Marines of criminals belonging to two IS affiliates — Maute group and Abu Sayyaf.

“Fighting is still ongoing right now for us to liberate the entire city,” Brawner said.

But Malacañang described the taking of the bridge as a major development.

Ernesto Abella, presidential spokesperson, said it meant the last escape route of the terrorists had been sealed off.

Maj. Gen. Rolando Bautista, Joint Task Force Marawi commander, who crossed the bridge with other military officials, said that retaking Masiu Bridge was a significant phase of the military’s progress in retaking the city from the terror groups.

“The terrorists are now becoming desperate as our soldiers and police are closing in on their defensive positions,” Bautista said.

“We are continuing our appeal to the terrorists to release their hostages and for them to surrender,” he added.

The Masiu Bridge was believed to lead to Lake Lanao and a possible escape route of remnants of Maute and Abu Sayyaf.

On Sept. 2, government forces took control of Bayabao Bridge in Barangay Banggolo, which became a major battleground between government troops and the terrorists since fighting broke out in May.

Brawner said the three bridges could now be used to rapidly transport troops and combat supplies to the war zone.

Since May 23, a total of 151 soldiers and police have been killed in the fighting. The military claimed that 694 terrorists were also killed.

Clashes flared up when soldiers and policemen tried to arrest Isnilon Hapilon, the acknowledged head of IS in Mindanao.

The arresting teams, however, were met by gunfire from the terrorists backed by an undetermined number of foreign fighters.

During his fifth visit to soldiers here, President Duterte said “the end of the combat operation is just around the corner.”

IS in Lanao del Sur

Brawner said that once the clashes were over, the rehabilitation phase would proceed.

The military also deployed soldiers to the town of Bayanga, Lanao del Sur province, where suspected IS members were seen.

“We are taking it seriously,” said Brawner of reports that up to 20 men wearing black overalls had tried to attack a military detachment in the town.

In Malacañang, Abella said the military was not on its “final push” to finish off the terrorists.

“Our recent successes would hopefully lead to the eventual liberation of the entire city and pave the way back to normalcy,” Abella said.

Mr. Duterte said on Thursday that he would lift martial law in Mindanao after the clearing operations in Marawi.

“The catch word is when it’s safe here in Mindanao,” Mr. Duterte said.

The President said the rebuilding of Marawi would “immediately” start once the fighting ends.

“Immediately, when it is safe for people in government to go around unmolested,” Mr. Duterte said when asked when rehabilitation efforts would begin.

“I have to clean the place and watch out if there is a spillover or any sympathy group would initiate the trouble again,” he added. —JEOFFREY MAITEM AND PHILIP TUBEZA