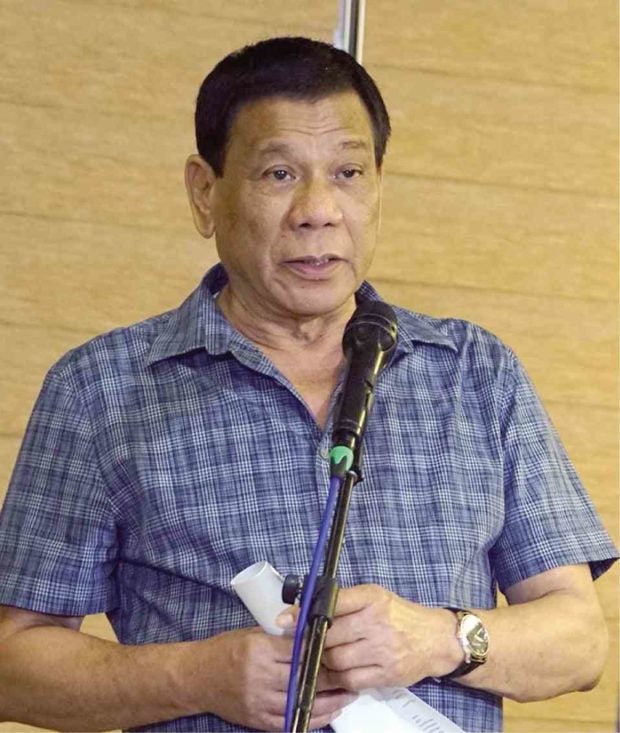 President Duterte: “When I was just a student, fourth year, I already had about P3 million. ” —PRESIDENTIAL PHOTO

DAVAO CITY — President Rodrigo Duterte offered a glimpse on Friday into the source of his and his family’s wealth to counter accusations that he hid ill-gotten funds, saying he and his siblings made “millions” selling inherited land and cutting trees.

Over dinner with reporters here on Friday, Mr. Duterte said he and his siblings decided to sell off pieces of real estate property they inherited from their parents because they were already quarreling over it.

“We siblings quarreled over (some pieces of property). So I said, sell,” said the President, who did not entertain questions from reporters during the dinner.

“I was a lawyer then,” Mr. Duterte said, recalling the time the inherited lots were sold. “But even before that, when I was just a student, fourth year, I already had about P3 million,”  the President said.

He did not say, however, where the P3 million he had as a student came from.

He said he found it revolting to be accused without basis of amassing wealth from corruption because his detractors could have easily checked how the Duterte family made money in real estate transactions.

Among the family-owned pieces of real estate property sold was a parcel of land in the village of Ulas, where a biscuit factory used to be, according to Mr. Duterte.

Although the President failed to mention how big the piece of property was, those in the know estimated it to be some 2 hectares in area.

The Ulas land is now occupied by a gasoline station, a fast-food restaurant and other establishments.

Mr. Duterte also spoke of a piece of land near an ice plant in the village of Dumoy which he and his siblings agreed to sell, too. He also mentioned another family-owned land in “Carriedo.”

No details were made available on the land in Dumoy or Carriedo.

The Carriedo that Mr. Duterte mentioned could be somewhere near Pedro Carriedo Elementary School or anywhere near the location of buildings named Carriedo here.

The President said his siblings wanted their hands on the lot near the ice plant in Dumoy because it was prime property. So instead of quarreling, they decided to sell it.

“So when we divided (proceeds from the sale), we had our first millions already,”  Mr. Duterte said.

He said all the money representing his share from the real estate deals were deposited with the then “Insular Bank of Asia.”

He challenged critics to do the math but he did not provide numbers. “You have to compute it because that was the time we divided our properties when my father died,” the President said. Mr. Duterte’s father died in 1968.

All the lands sold sometime in the 1970s were in Talomo District where, according to Bureau of Internal Revenue Order No. 97 in 2002, the value of land ranged from a low of P550 per square meters for agricultural lots to a high of P4,500 per square meter for industrial ones.

Applying those rates, the Duterte property in Ulas village would have sold for P90 million.

People in the know

Mr. Duterte said many people were knowledgeable about the real estate transactions and could back up his narration because “a lot of them are still alive.” “This, for all to know. You go back to the trace of … you have to trace it,” he said.

He said the lands that were sold and the ones he got as his share were part of “hereditary properties.”

“But those titles now are in the name of my children. All (my) properties,” Mr. Duterte said.

Another source of the Dutertes’ wealth, the President said, was logging.

Mr. Duterte did not say what logging company his family set up in the past but the more prominent logging firms in the Davao region included those owned by the Alcantara family and  Caridad Almendras Logging Enterprise, owned by the family of then senator, Alejandro Almendras.

The Dutertes regarded the Alcantaras as close family friends and the Almendrases as relatives.

“The one in Unionbank. I hope (Sen. Antonio) Trillanes (IV) would see it,” he added.

Mr. Duterte said he was hoping some people would get enlightened by his narration.

“If you want really to trace my money, start from there (real estate deals),” he said.

He repeated a promise that if critics were able to prove that he had ill-gotten funds in the banks, he would gladly resign as President.

“I am telling you, you show any bank account, foreign (or otherwise) and I will step down tomorrow. I will do that. I am telling you the truth, you are all witnesses to my career,” the President said.

He took another swipe at Trillanes, who had challenged the President to sign a bank secrecy waiver.

Trillanes, he said, was simply hungry for power who “allowed himself to be jailed, then raised funds through sympathy.”

“He knew how to, he’s that scheming,” Mr. Duterte said.

He repeated another promise to show proof of Trillanes’ hidden wealth. “I will reveal it, just wait,” he told reporters at the dinner.

“He has numerous accounts, small balances,” said Mr. Duterte of Trillanes’ supposed wealth. “Because if you try to deposit large amounts, it would cause an alarm in the bank,” the President said.

According to the President, Trillanes knew the identity of the source of the senator’s account details. —Allan Nawal and Frinston Lim