LOS BAÑOS, Laguna—Thousands of people have been flocking to the University of the Philippines-Los Baños (UPLB) since Saturday morning to claim cash as many of them said they were given promises to receive money coming from the Marcoses.

The people interviewed by the Inquirer said they came from different parts of Cavite, Laguna, Batangas, Rizal, Quezon (CALABARZON) but others came from as far as Marinduque.

Joel Levita, 37, a vegetable farmer from Balete town in Batangas, said he went to UPLB after he was invited by a “coordinator” who promised him cash. Levita said he was only taking his chances if there would be indeed money to be distributed.

According to the people gathering at the area, the activity was organized by the One Social Family Credit Cooperative.

Amelita Lopez, 67, a coordinator of the cooperative, said those who would “register” today would each be given at least P500,000.

She, however, could not say where the money would be coming from. The amount, she said, would be given in tranches, P10,000 monthly, through a bank that she did not identify.

At the event, the Inquirer saw pamphlets that detail the achievements of the late strongman Ferdinand Marcos Sr. being distributed to people. 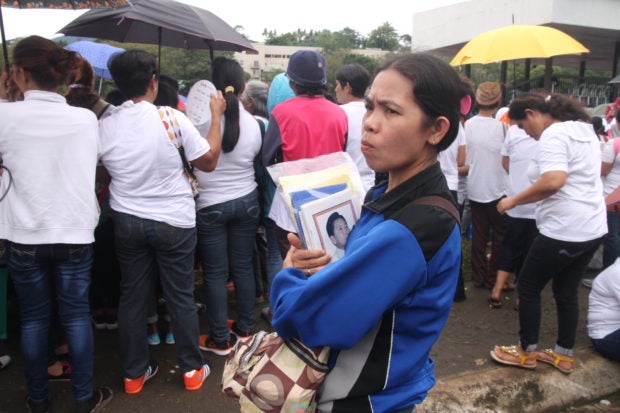 A woman holds a pamphlet detailing the achievements of the late strongman Ferdinand Marcos at a gathering inside the University of the Philippines Los Banos campus in Laguna province. The gathering is reportedly organized by the group called One Social Family Credit Cooperative where registrants are entitled to receive money from the Marcoses. PHOTO BY KIMMY BARAOIDAN / INQUIRER SOUTHERN LUZON

Los Baños police chief Supt. Arvin Avelino said the police were told that the event was an assembly of a cooperative but did not know if it was in any way related to the Marcoses.

Several UPLB professors also said they were surprised by the swelling of participants to an event they did not even know. A member of the UPLB Community Support Brigade estimated the crowd to be around 112,000 before Saturday noon.

UPLB officials have yet to respond to the Inquirer’s requests for an interview but a traffic advisory issued this morning said one of the activities happening today in the campus is a general assembly of the
One Social Family Credit Cooperative.

The UPLB said the group was issued a permit by the Department of Human Kinetics-College of Arts and Sciences. /jpv

Read Next
‘Hiding won’t do you good’: Frat men in hazing death urged to surface
EDITORS' PICK
ING Pay is the safe and reliable way to pay – here’s why
TECNO Mobile sparks up summer with fun livestreams, great prizes
PGH seeks more plasma donors as it loses 5 patients to COVID-19 daily
House-to-house COVID-19 testing pressed to get ‘true’ PH state
WATCH: INQside Look on the upcoming 2022 polls with Comelec spokesperson James Jimenez
Smart is fastest 5G Network in PH – Ookla
MOST READ
PH military pouring naval, air assets near site of Chinese incursions in WPS
US adds 116 countries to its ‘Do Not Travel’ advisory list
PH-Canada labor agreement coming soon – DOLE
Ganging up on a good thing
Don't miss out on the latest news and information.