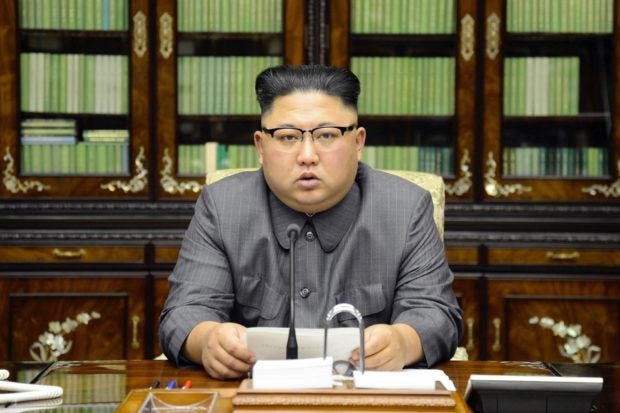 SEOUL—North Korea threatened to explode a hydrogen bomb over the Pacific Ocean in retaliation for US President Donald Trump’s threat to “totally destroy” the North if it continued with its nuclear weapons program, according to Pyongyang’s foreign minister.

North Korean dictator Kim Jong-un, in response to Trump’s speech at the United Nations General Assembly, warned the United States of the “highest level of hard-line countermeasure in history.”

Kim, who stoked global alarm in September by testing a hydrogen bomb that could fit a missile, did not detail what kind of response he planned.

“I think that it could be an H-bomb test of an unprecedented level perhaps over the Pacific,” he said.

But he added: “It is up to our leader so I do not know well.”

Such a test would be considered a major provocation by Washington and its allies.

He said North Korea might conduct an hydrogren bomb test with a medium-range or intercontinental ballistic missile, given its recent advances in missile and nuclear weapons development.

“We cannot deny the possibility it may fly over our country,” he said.

Vipin Narang, a nuclear strategy expert at Massachusetts Institute of Technology, said that such a test could pose a danger to shipping and aircraft, even if the North declared a keep-out zone.

“And if the test doesn’t go according to plan, you could have populations at risk, too,” he said. “We are talking about putting a live nuclear warhead on a missile that has been tested only a handful of times. It is truly terrifying if something goes wrong,” Narang said.

That might include firing a Hwasong-14 intercontinental ballistic missile over Japan to a range of around 7,000 kilometers to display a capability to reach Hawaii or Alaska.

KCNA, quoting Kim, described Trump as a “mentally deranged” leader who would “pay dearly” for his threat to destroy North Korea.

In a rare personal attack published hours after the United States announced tougher sanctions, the North Korean dictator took aim at Trump over his maiden speech at the United Nations, in which he also branded Kim as “Rocket Man.”

Trump “insulted me and my country in front of the eyes of the world and made the most ferocious declaration of war in history,” Kim said, according to KCNA.

“I will make the man holding the prerogative of the supreme command in the United States pay dearly for his speech,” said Kim, calling Trump’s speech “unprecedented rude nonsense.”

The KCNA dispatch was accompanied by a photo of the North Korean leader sitting behind a desk holding a piece of paper.

“I will surely and definitely tame the mentally deranged US dotard with fire,” he said.

Kim’s retort was published after Trump announced he had signed an executive order to ban firms from operating in the United States if they deal with North Korea.

The move was the latest effort to tighten the screws on Pyongyang over its banned weapons program which went on full gear with the hydrogen bomb test and the launch of two missiles over Japanese air space.

It also came after the UN Security Council agreed on more sanctions on North Korea aimed at reducing its ability to trade with the outside world.

Analysts said the sanctions appeared to be futile and warned that the increasingly vicious personal exchanges between Washington and Pyongyang did not augur well.

“There are some very dangerous things that could come that move this from theater to reality,” said John Delury of Yonsei University in Seoul.

He added that Kim’s rare first-person statement could also have been aimed at North Koreans.

The KCNA dispatch was unusual in that it was written in the first person, albeit filtered through state media, which were part of propaganda efforts meant to glorify Kim.

South Korea’s government said it was the first such direct address to the world by any North Korean leader.

Washington had refused to negotiate with Pyongyang, despite appeals to do so from Beijing and Moscow, unless North Korea abandoned its nuclear weapons program.

But in a meeting with Japanese Prime Minister Shinzo Abe and South Korean President Moon Jae-in, Trump suggested the door to dialogue was open.

“Why not?” he said, when asked whether there could be talks with Pyongyang.

The latest round of US sanctions targeted businesses involved in everything from technology to finance and fishing.

Trump’s executive order also bans any aircraft or ship that has traveled to North Korea from landing in the United States.

No survival in nukes

US Secretary of State Rex Tillerson told the UN Security Council: “North Korea may assume that nuclear weapons may ensure the survival of its regime. In truth, nuclear weapons are clearly only leading to greater isolation, ignominy and deprivation.”

China has by far the most influence on North Korea, providing an economic lifeline.

But it also feared the consequences if the regime collapsed, such as an exodus of refugees or a US-allied, reunited Korea on its border.

Chinese Foreign Minister Wang Yi told the General Assembly it was not too late for talks.

“There is still hope for peace and we must not give up. Negotiation is the only way out and deserves every effort,” Wang said.

Those sentiments were echoed by Russian Foreign Minister Sergei Lavrov, who said that while his government condemned North Korea “military hysteria is not just an impasse, it’s disaster.”

North Korean envoy Ri was expected to meet on Saturday with UN Secretary General Antonio Guterres, who would send out feelers on possible diplomatic talks.

But Chung Sung-yoon, analyst at the Korea Institute for National Unification, told AFP that the North itself might have shelved the idea of negotiations until after it reached its nuclear goal.

“People say this is all part of its brinkmanship strategy to force the US to come forward for negotiation,” Chung said. “The North is leaving too little room for the US to do so with the latest series of threats and provocation,” he said.

North Korea had claimed its successful tests gives it the capability to strike anywhere in the United States with a nuclear warhead-fitted missile. And if that would not be successful, the North might try to explode a nuclear bomb midair to disrupt electronic signals and poison the skies over its target with radiation. —REPORTS FROM AFP AND AP