Era of fake news is over, Mocha told | Inquirer News

Era of fake news is over, Mocha told 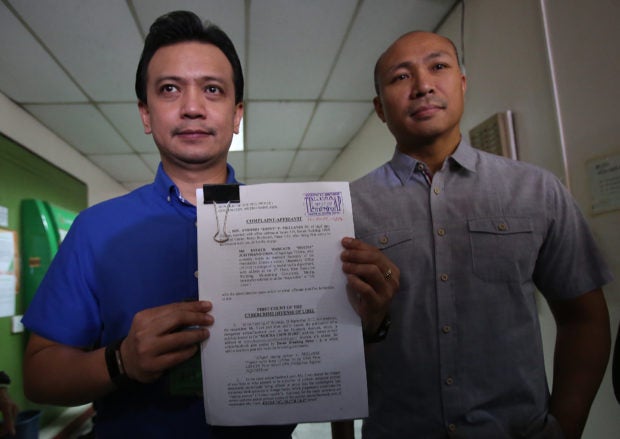 Nothing raises the hackles of Sen. Antonio Trillanes IV than a serving of Mocha—hot or cold—in her blog of fake news.

Now, “the era of fake news is over,” or so Trillanes said.

The senator filed multiple complaints against Presidential Communications Operations Office (PCOO) Assistant Secretary for social media Margaux “Mocha” Uson at the Office of the Ombudsman on Friday, primarily for posts on her infamous Facebook “blog” earlier this month accusing him of keeping “alleged hidden wealth” in offshore bank accounts.

Trillanes had debunked the claim with bank certifications that the supposed accounts in Singapore did not even exist.

Trillanes’ complaints against Uson at the Ombudsman on Friday noon totaled seven—six of which were for criminal offenses and one for administrative—including three counts of “cyberlibel” for the Facebook posts, for falsification or use of falsified documents, for violating the Anti-Graft and Corrupt Practices Act for “using her position to cause undue harm to another party,” violating the code of ethics for public officials, or Republic Act No. 6713, and for “grave misconduct.”

Trillanes said he had also filed an ethics complaint against Uson for her “continued practice of her profession” as an entertainment performer and manager of dance group Mocha Girls.

“That’s not permitted. As a government official, you are supposed to have one job, one source of compensation unless specifically authorized by law.”

The libel complaints under the Cybercrime Prevention Act were for the posts on the “Mocha Uson Blog” on Facebook, as shared from the account “Davao Breaking News-2” on Trillanes’ supposed offshore accounts.

“Now as to he [sic] really owns the accounts or not, that remains to be determined. But the fact remains that there are bank documents to prove the contention,” the page said, as it posted more purported documents, mostly Taishin International Bank remittance forms, showing applications for remittance to Trillanes’ supposed offshore accounts.

Based on saved screen captures by several media outlets and by Trillanes’ camp, the post under contention included a photograph of a document supposedly showing that Trillanes owned a DBS account in the Alexandra branch in Singapore, with account number 1178000281602. Aside from Uson, news host Erwin Tulfo also shared the post.

Trillanes told reporters that Mr. Duterte was caught lying when he himself admitted that he “invented” the supposed bank account numbers. “He said I had offshore accounts when I had none,” the senator said.

President Duterte, in an interview with Tulfo, tried to explain later that the account number he announced, 178000296012, was purposefully “invented” as some sort of ploy against Trillanes. Trillanes actually had both account numbers checked and debunked by the Singapore bank.

“I checked both accounts with the DBS bank. They were both nonexistent,” Trillanes said.

Asked by the Inquirer why Trillanes was holding Uson accountable for the allegation although she only shared the post, the senator said that “as a responsible senior government official, [our standards are higher].”

“We should verify the truthfulness of a report before sharing it,” Trillanes said.

The senator said he was still studying what complaints to file against Tulfo and Davao Breaking News-2 but that he would “definitely” push through with cases against them.

Trillanes only smirked at Uson’s defense that she only repeated an “alleged” information: “She should explain that to the Ombudsman. She needs a lawyer—a good lawyer … ”

“Let this be a lesson not only to Ms. Mocha Uson but also to our fellow Filipinos who have a penchant for sharing fake news,” Trillanes said. “All who spread fake news now will have to answer to the law.”

For his part, presidential spokesperson Ernesto Abella on Friday said that the Palace does not spread fake news and Trillanes is free to sue Uson as he pleases.

“It’s clear we don’t do stuff like that,” Abella said.