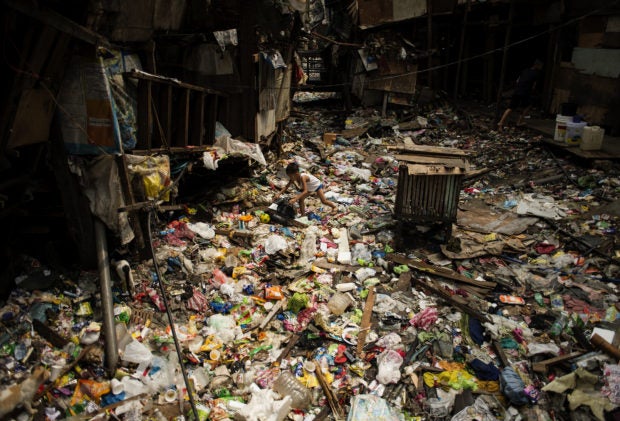 A boy walks on a garbage filled creek in Manila to get his ball. Giant Western consumer product brands led by Nestle, Unilever and Procter & Gamble cause serious ocean pollution by packaging products sold in the Philippines in cheap and disposable plastics. —AFP

The environmental group ranked the Philippines as the “third-worst polluter into the world’s oceans” after China and Indonesia in a report released Friday in Manila.

Single-use plastics from products sold by conglomerates, such as bags, bottle labels, and straws, stood out during a week-long Greenpeace clean-up campaign held on Manila Bay this month, it said.

More than 54,200 pieces of plastic waste were recovered from the bay in total, including some 9,000 from Nestle products the most frequently-seen brand, according to a tally kept by the group.

“These corporations are the missing piece in the global fight against plastic pollution,” Greenpeace campaigner Abigail Aguilar said in a statement.

Greenpeace said plastic waste was a particularly serious problem in “sachet economies” like the Philippines and other developing countries, where people on limited incomes are pushed to buy cheap goods in small quantities.

In the Philippines, a country of 103 million people with high levels of poverty, products sold in single-use sachets include instant coffee, shampoo, cooking oil, food seasoning and toothpaste.

These low-value disposable sachets usually end up in landfill or as litter or marine debris, according to Greenpeace.

Greenpeace said the Philippines contributed 1.88 million tons of “mismanaged plastic waste” each year, with Thailand, Vietnam and Malaysia also on its list of the world’s biggest ocean plastic polluters.

The problem is expected to worsen as these countries’ growing economies lead to rising incomes and “exploding demand for consumer products”, the campaign group said.

Nestle provided Aguilar details of its “environmental sustainability projects” on Friday, she said.