Dela Rosa: 2% of cops are ‘scalawags’ 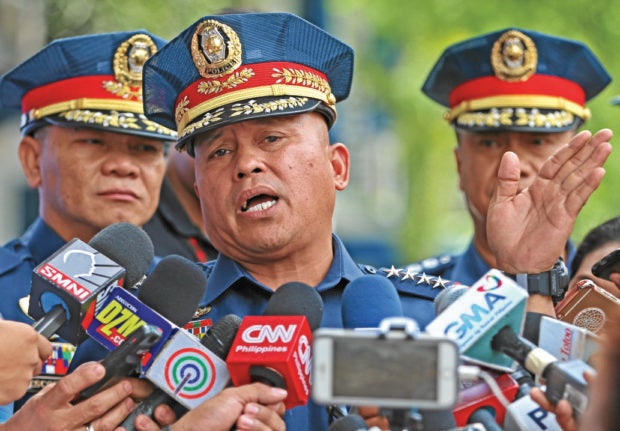 PNP chief Director General Ronald “Bato” dela Rosa on Friday said that despite the efforts of the administration to rid the police force of rogue policemen, at least two percent or 3,500 of PNP personnel were “scalawags.”

In the press conference in Camp Simeon Ola in Legazpi City, Dela Rosa said these scalawags in the police organization were still involved in illegal activities, tarnishing the image of the PNP.

“I will make sure that these police scalawags’ days would end soonest, as the police cleansing process is in full speed,” Dela Rosa said.

The PNP chief said these police scalawags were mostly based in Metro Manila and nearby provinces.

“We will try our best to cleanse our ranks. As I have said before, it cannot be done overnight or weeks, months or year,” he said.

Measures have been instituted to address the problem but he laments “we have already passed the one-year period but there are still cops within the 175,000-strong police force who commit wrongdoings.”

He said even one scalawag was too much for the force.

“If your standard is to aim for perfection, you want the 175,000 members to be good. We cannot do it overnight, but one year has passed already, but we will try to clean our organization,” he said.

He added that the number of cases against bad cops, though still insignificant, were being magnified by people who were against the government’s war on drugs.

“We cannot do anything, it is being magnified. We are not looking for an excuse. Being a policeman, you are expected to do the right thing, but when you do something wrong, the whole organization is affected,” he said.

Dela Rosa cited the purging of close to 300 policemen who were found to have committed misconduct and grave misconduct. “Those cops involved in grave misconduct…we make it clear that they would no longer be admitted back to the service,” he said.

He cited the case of the 1,000 policemen in Caloocan City who were removed from their posts and made to undergo retraining and reassigned to other stations in Manila.

Asked what would be the impact of the dismissal of thousands of recidivist cops to the entire PNP organization, Dela Rosa said 2 percent was insignificant but would be very significant on the quality of service it has to deliver to the public.