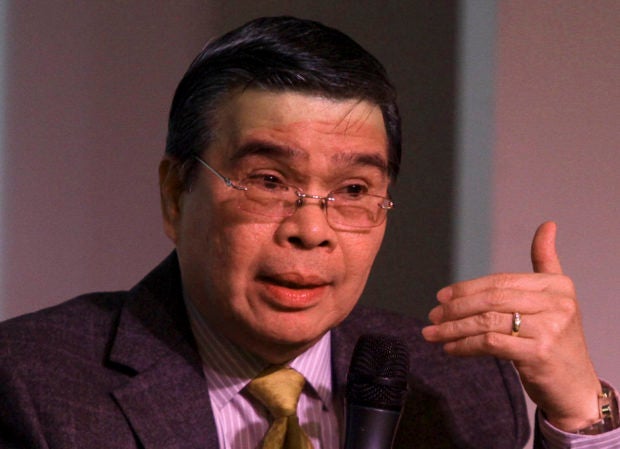 These are the two reasons why Rodolfo Salalima, the first secretary of the Department of Information and Communications Technology (DICT), offered to resign from office last Sept. 5, 2017.

Speaking with DICT employees, Salalima explained that he wanted to step down as the agency’s top official because he cannot deal with corruption and interference.

Salalima, the former lead counsel of Globe Telecom with four decades of law and telecommunications experience under his belt, called an “emergency” general assembly Friday afternoon where he informed the employees he served for more than a year about his reasons for leaving.

During the assembly, he made multiple vague references to favors he rejected and the struggle to do “the right thing” while DICT secretary for the last 14 months.

“The deal was ‘no interference, no corruption,’” Salalima said, referring to his talks with President Rodrigo Duterte before accepting the job of DICT secretary.

“I resisted pressures. On the issue of interference, it was not obeyed. Because of that, I had and must resign,” Salalima said.

Salalima spoke in the agency’s small auditorium, which was packed with staffers, many of whom were either standing or sitting on the stairs leading down to the stage where he stood.

He said it was his “duty” to explain his reasons for leaving, which was first reported in an online news website Thursday night— catching off-guard many officers in the DICT.

READ: Source: DICT chief Salalima offers to quit due to ‘bureaucracy and politics’

During the assembly, Salalima alternately apologized to DICT employees for not consulting them about his plans while praising the relatively young agency for its work amid the perception that it was underperforming.

“People will tell you of failures, but I owe it to you to tell the truth,” Salalima said.

Salalima revealed that he finally decided to leave “while driving home” on Sept. 4. He narrated how he told his family, who was then “happy” to hear the news. He wrote his resignation letter the following day.

“I was informed that the President has not yet accepted my resignation. He wants to talk to me,” Salalima told the DICT assembly on Friday.

He explained that he did not indicate that the resignation was “irrevocable,” out of respect and not to pressure Duterte, a schoolmate in San Beda College of Law.

“I do not want to threaten our President,” Salalima said. “He was my schoolmate. Because I knew him… but he might not know everything that is going on.”

Reading a portion of his letter to the President, Salalima again mentioned times he resisted corruption.

“I accepted that this department shall have no corruption, because that is the President’s commandment to all of us. I rejected favors. I rejected and opposed corruption in this government… and this is what I meant. I have to resign,” he said.

Salalima, however, did not detail the pressures he is facing, and from which quarters.

He told the Inquirer after the DICT assembly that he would be free to talk once his resignation is accepted.

A source, however, noted that some of the interference was coming from certain government factions, including pressure to favor certain suppliers in the DICT’s largest project thus far, the P77.9-billion National Broadband project.

This project would provide high-speed internet to either unserved or underserved areas in the Philippines. An earlier version of the national broadband project was scrapped a decade ago during the Arroyo administration due to allegations of corruption.

Another individual said there were multiple other sources of “pressure,” and that Salalima had grown weary of the slow bureaucratic process that came with serving in public office.

Salalima, in his letter to Duterte, also thanked the President for mentioning the DICT in his second state of the nation address.

Among Salalima’s priority initiatives was to get Malacañang’s support in cutting regulatory bottlenecks, mostly on the local government unit level, that have impeded or slowed the construction of new cell sites.

Another early initiative was for the National Telecommunications Commission, which the DICT oversees, to retake idle radio frequencies so that these may be used by operating companies for the benefit of the public.

Salalima was credited for implementing the free WiFi project along EDSA last June and establishing the national government portal.

Slow internet issues by the country’s two main providers, PLDT Inc. and Globe Telecom, have always been being criticized affecting Salalima personally because of his former ties with Globe.

During the launch of the Davao landing station of the Southeast Asia-United States submarine cable system last August, he again addressed his critics.

Salalima recalled questions raised during his confirmation hearings last year, when he was asked about conflict-of-interest.

“I said there is no one in this country who has a monopoly on patriotism,” Salalima said. “I am a lawyer and I know my oath and I know where to place my heart once I become a public servant.”

One source said among those being considered as Salalima’s replacement is musician Ramon “RJ” Jacinto, because of his current role as presidential adviser on ICT and economic affairs.

Another candidate, according to reports, is DICT assistant secretary and chief of staff Carlos Caliwara.

Caliwara, when asked to comment in an interview Friday, said he was hoping Salalima would stay.

Salalima’s assembly meeting on Friday likely lifted morale of employees at the DICT. After the event, employees gathered outside the auditorium and surprised Salalima with an impromptu “photo op,” complete with multiple “selfie” sessions.

Employees also prepared a streamer with a picture of Salalima wearing his trademark vest and a hashtag some hoped would go viral: #NoToSalalimaResignation.

The employees also thanked Salalima for his honesty and integrity. /jpv