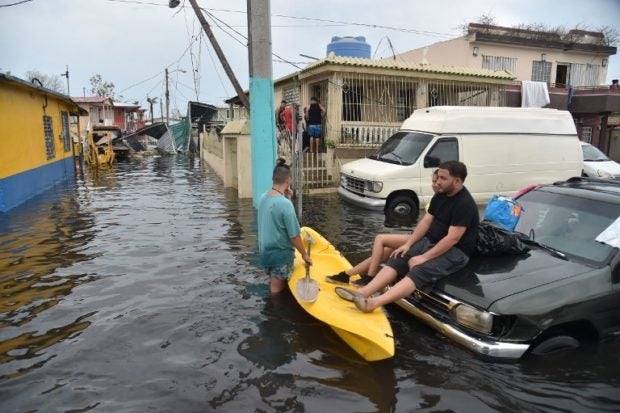 People stand near a kayak on a flooded street after the passage of hurricane Maria,in Juana Matos, Catano, Puerto Rico, on September 21, 2017.
Puerto Rico braced for potentially calamitous flash flooding after being pummeled by Hurricane Maria which devastated the island and knocked out the entire electricity grid. The hurricane, which Puerto Rico Governor Ricardo Rossello called “the most devastating storm in a century,” had battered the island of 3.4 million people after roaring ashore early Wednesday with deadly winds and heavy rain.
AFP

SAN JUAN, Puerto Rico—On a good day it’s a Caribbean paradise but Puerto Rico looked Thursday like it had been to hell and back after suffering the fury of Hurricane Maria.

Roads were turned to mucky brown rivers that people ply with kayaks and small boats. Houses were blown away like matchsticks in the storm’s 260 kilometers per hour winds. Rubble and downed trees and power lines now block streets everywhere after Wednesday’s pre-dawn taste of Mother Nature’s might.

So far one person has been confirmed dead on the US island territory of 3.4 million people: a man struck by a board he had used to cover his windows. Across the Caribbean, the storm is blamed for a total of 21 deaths.

Electricity and telecommunications services are out across the island and officials say it will be months before power is fully restored.

“We all lived through the worst night of our lives,” said Iris Rivera, 53, who lives in a touristy area of San Juan called Ocean Park.

That is exactly what the neighborhood was on Thursday: water, water and more water, its residents rowing and boating across it to view the storm’s aftermath and check up on neighbors.

“Everyone is helping to clean up, direct traffic and help their neighbor,” said Rivera.

As the storm moved away to the west, its tail is leaving torrential rains that have prompted flash flood warnings. The nightmare is not over.

Despite all the gestures of solidarity, some stores in the center of San Juan have been looted and no strong police presence was visible. Still, authorities said 10 people had been arrested.

“I cannot believe that after helping people of other islands after Hurricane Irma, now we have to deal with looting here,” said Alex Garcia, an Ocean Park man who was taking drinking water to people trapped in their homes. Irma struck the Caribbean and Florida earlier this month.

Some people have ventured out to try to clear roads that are not flooded but rather just blocked with rubble or trees.

But Governor Ricardo Rossello urged people to stay in their homes and leave clean up and recovery efforts to crews trained to do that kind of work.

“Right now there is nothing you can do outside your homes and the shelters. Practically all the roads are blocked,” said Rossello.

He warned that the island is not out of the woods yet because of forecasts of heavy rains from the tail end of Hurricane Maria.

Since Wednesday night the National Guard has rescued dozens of families in Toa Baja, a San Juan suburb that was flooded when a lake overflowed.

Those waters had gone down somewhat on Thursday but nearby homes ended up full of mud.

The government has imposed a nighttime curfew and banned sales of alcohol until Saturday.

Social media and local radio stations are buzzing with messages and calls from people on the island and Puerto Ricans living abroad who have not heard from loved ones since the storm hit.

“That means everyone,” Rossello said. “I have not been able to speak to my parents, either.”