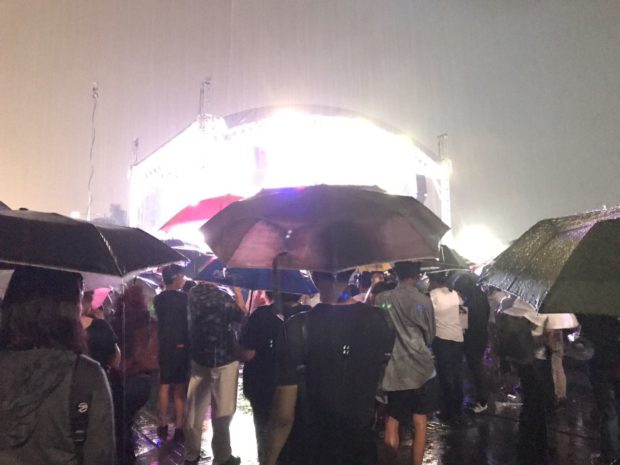 Despite the rain, participants to the “End Tyranny” rally at the Rizal Park on Thursday, Sept. 21, 2017, remain unperturbed. (Photo by JHOANNA BALLARAN / INQUIRER.net)

“According to media reports, the protest actions today were the biggest so far against the administration,” Casiño said. “Thank you for coming.”

Organizers of the rally said the crowd reached more than 30,000 and that the protest trended over social media.

At around 8 p.m., the rallyists rang bells they brought along as Catholic churches in the Archdiocese of Manila also rang their bells in protest against extrajudicial killings linked to the Duterte administration’s war on drugs.

In her message, De Lima scored President Rodrigo Duterte for kowtowing to China over the West Philippine Sea issue and for not acting on the smuggling of P6.4 billion worth of shabu through the Bureau of Customs.

“Just think where he would bring us if martial is declared over the entire country,” De Lima said.

Veteran actor Pen Medina urged the crowd not to fight with Duterte supporters and instead work to “change their minds.”

“Love them and don’t fight with them,” he told the protesters.

Actresses Agot Isidro and Cherry Pie Picache also attended the rally, which ended at around 10:15 p.m. after bands entertained the remaining crowd of around 100. /atm