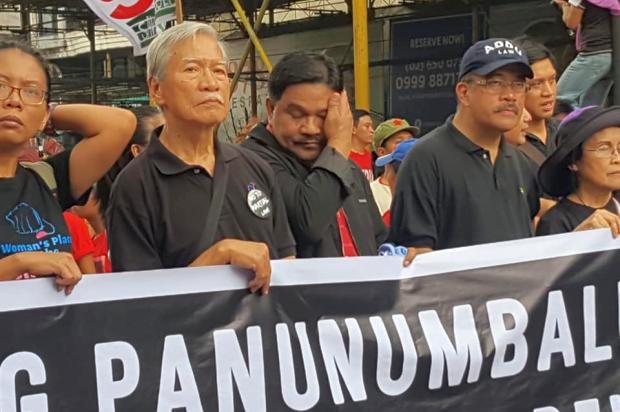 Before a series of protests erupted in different parts of Metro Manila as part of the National Day of Protest, Director General Ronald “Bato” dela Rosa prayed with his men in Manila that everything would be peaceful.

Dela Rosa, chief of the Philippine National Police (PNP), said he ordered his men to exercise maximum tolerance towards protesters, especially those against President Rodrigo Duterte.

[“Don’t block them. We’ll make our move only if something bad happens, if someone gets hurt, if properties get broken, or if they block motorists.”]

“They can go to wherever they want to go to express themselves,” he added.

No rocks were thrown, but the sound system speakers of both anti- and pro-Duterte protesters’ battled it oiut at the Mendiola Peace Arch.

While one was playing the national nthem and “Dakilang Lahi,” the militants continued to chant: “Marcos, Hitler, Duterte, Tuta.”

Around 5,000 protesters – mostly composed of youth, indigenous people, and militant groups – trooped outside the Mendiola gate of Malacañang at 2 p.m., after grouping at noon at the gates of University of Santo Tomas on España Boulevard.

A group of Lumads wearing their indigenous attire led the way with a dance-and-gong play, going through Nicanor Reyes (Morayta) Street and Recto Avenue, before stopping at the corner of Legarda Street.

Also in the anti-Duterte protest was former Agrarian Secretary Rafael Mariano, whose appointment was rejected by the Commission on Appointments on Sept. 6.

Mariano had said he would be back on the streets to join the Thursday protest.

The groups called for Duterte to lift his martial law in Mindanao, saying it had one more harm than good for its people.

Hafssa Salahuddin of Tindeg Ranao, a formation of survivors from of the Marawi clash, appealed to the President to stop the bombing in her city.

Arnel Dumagab, a Lumad from the Sandugo group, said nobody paid them – contrary to some rumors – to make the trip all the way to Manila. They came as as living witnesses of the abuses done by the military Mindanao, he said.

The anti-Duterte protesters also called for the stop on extrajudicial killings, whose numbers, they claim, started to rise when the President declared a war on drugs.

Human rights groups estimate that 13,000 people have been killed by police and vigilante gunmen since July last year.

The protesters simulated a crime scene, which has become typical in almost all cases of drug-related killings: a slumped man, with a sachet of shabu on his left hand, and a .38-cal. revolver on the other.

On the other side of the Mendiola gate, beside the Centro Escolar University, about 3,000 pro-Duterte protesters held their own program, which organized by the Mayor Rodrigo Roa Duterte-National Excecutive Coordinating Committe.

The group is a volunteer organization that helped former the former Davao Mayor win the presidential election.

One of the pro-Duterte group’s prominent guests was senatorial bet Greco Belgica, who earned praises from the protesters when he attacked the previous administration of President Benigno Aquino III.

The crowd booed and yelled: “Wala.”

Busloads of people – most of them wearing green and orange shirts – attended the event.

Among them was Michael Cajucom, the chairman of Barangay 619 in Manila. He said they were not a “hakot crowd” and that he brought with him his council members “and other residents who volunteered to show their support for the President.”

He said Duterte’s programs were “good.”

On the other hand, Rommy Mapili rode from a bus with dozens members of Pangulo ng Aksyon ng Sambayanan, all wearing green shirts and caps.

The 57-year-old president of the group said they believed it was Duterte who would “fulfill the promises that previous presidents had not given to the poor.”

A resident of Barangay 14 in Caloocan where teens were killed after allegedly shooting it out with policemen, Mapili echoed the sentiments of the President: “Normal lang na may namamatay na mga inosente sa isang giyera, mga casualty. Sana huwag naman nating husgaan kaagad,.”

Dela Rosa said that, even if Duterte would declare a nationwide martial law, “it would be different from the martial law of Marcos.”

‘I already moved on’

Dela Rosa even questioned why there were protests on the anniversary of the declaration of martial law by President Ferdinand Marcos.

He said that he himself who was a victim of martial law in Davao had already moved on.