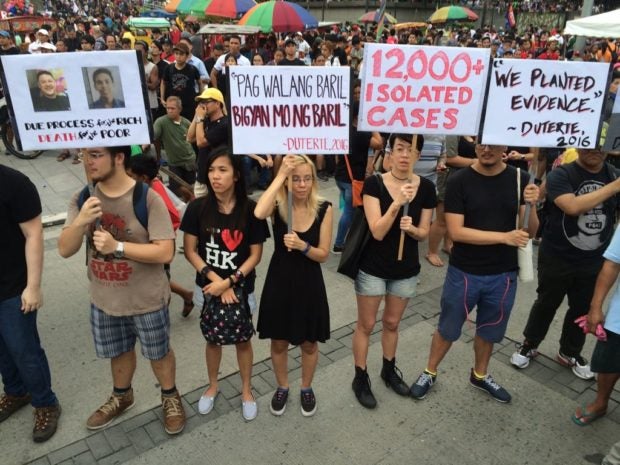 Millennials turned out in full force for the Sept. 21 protest, with organizers estimating that at least 3,000 students from schools along Taft Avenue joined the march to Rizal Park in Manila.

Former Bayan Muna Rep. Neri Colmenares spoke to protesters at the gate of UP Manila, slamming those who accused the youth of being unaware of the horrors of martial law.

He said this was the fault of educators and past administrations, from former President Corazon Aquino up to the Duterte administration, which had failed to include the teaching of martial law in school curriculums.

Chanting “Never again! Never again to martial law,” the Taft contingent assembled outside the Philippine General Hospital and marched to Rizal Park, led by nuns from St. Scholastica’s Manila at around 3:45 p.m.

St. Scholastica’s Academy in Marikina issued a circular to parents on Tuesday decrying the government’s brutal crackdown on illeagl drugs as responsible for creating “killing fields” throughout the nation.

“All of us are concerned. We are wondering where our country is going,” said the circular signed by directress Joselina Nepomuceno.

The pillars of De La Salle University’s St. La Salle Hall were decked with black cloth and the words: “Stop the killings. Start the healing.”

Adamson University’s student government issued a statement in support of the Sept. 21 protest, saying it was “high time for the youth to partake in campaigns … that aim to thwart tyranny in the Philippines.”

Students carried placards that referenced millennial phrases like “Young & Broke, but Still Woke,” “Shookt is an understatement,” and “Mamshies, #NeverAgain.”

DLSU students also carried photos of teenagers who had been slain in August in police operations, 17-year-old Kian Loyd delos Santos, 19-year-old Carl Angelo Arnaiz, and 14-year-old Reynaldo de Guzman, pleading with the government to stop the killings in its brutal antidrug war and holding signs that read: “You can bury the body but not the truth.”

The student protesters also called for martial law to be lifted in Mindanao, raising signs that said “Girls just wanna have peace” and urging peace talks between the administration and National Democratic Front of the Philippines to resume. /atm