Las Vegas—The pronouncements he keeps hearing in his head. 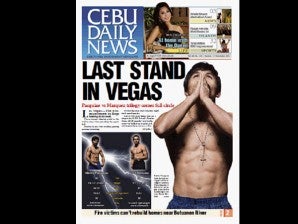 The newspaper clipping pasted on the wall he faces when pounding the speedball.

The face he sees when crushing sparring partners in training.

All that becomes flesh Saturday night for Manny Pacquiao.

And it will stand before him on a ring at the MGM Grand’s Garden Arena, all 143 pounds—and maybe more—of bulked-up muscles and counterpunching accuracy as Pacquiao hopes to finally chase off a three-named nightmare that has hounded him since 2004.

Pacquiao faces Juan Manuel Marquez, his Mexican archnemesis and perhaps the only other boxer to leave him perplexed—and bruised—since 2004.

It is the third match of their compelling rivalry, one already being lined up among the great trilogies of the sport’s history and one that could end up the most remembered.

“You’re going to see a fight for the ages,” Top Rank chief Bob Arum, both fighters’ promoter, assured the packed and screaming throng that gathered at the Garden Arena Friday for the weigh-in.

Even from someone prone to occasional lapses of hard-sell, Arum’s statement did sound more newsboy holler than carnival-barker bluster—if only for the effort both fighters have put into their respective training camps.

Nacho Beristain, Marquez’ trainer, minced no words when asked about the magnitude of this fight for his ward.

“It means everything,” he said Friday, and his ward concurred.

“I trained hard for this fight because this is the biggest fight of my career,” Marquez said after tipping the scales at 142 pounds, two under the catch weight stipulated for this bout.

Pacquiao (53-3-2, 38 KOs) came in at 143 and has said this fight is personal, constantly reminding himself during training of the disrespect he felt Marquez threw his way when the three-division champion flew to Manila wearing shirts proclaiming he won their two previous bouts.

“Respect is important to me,” Pacquiao said when he met journalists a final time before the bout.

“When Marquez came to Manila wearing those shirts, it was a slap to Manny’s face. And payback’s a bitch,” said renowned trainer Freddie Roach.

“I have to thank [Marquez] for that. He made it easier for me to motivate Manny.”

Pacquiao toned down on the revenge angle, saying, “Inside my heart, he is a friend. But we have business to do in the ring.”

By then, though, he had already put in hundreds of rounds of sparring, oftentimes hurting his simul partners with his unrestrained gusto.

Reports came out of the Wild Card gym in Hollywood about partners who didn’t return to the $1,000-a-week sessions and others who buckled their knees and twisted their ankles at the weight of the Pacman barrage.

When he hit the speedball, the Sarangani congressman would face a clipping of Marquez wearing a shirt proclaiming he won the two previous bouts against Pacquiao.

Oddsmakers believe that training will come to fore, listing Pacquiao a 10-1 favorite for the fight.

The 38-year-old veteran, reaching the tail end of a decorated career that features titles in the featherweight, super featherweight and lightweight divisions, will earn his biggest paycheck yet.

And although his guaranteed purse of $5-million—pay-per-view and gate shares excluded—pales in comparison to the $22 million Pacquiao will be getting, the fight could set him up for one final financial windfall.

If Marquez wins and Pacquiao will seek redemption through a rematch clause inserted in the fight contract, the Mexican will be guaranteed $10 million.
With all the money involved, though, both fighters aren’t talking paycheck.

Neither has bothered to delve on the fact that Pacquiao’s WBO welterweight crown—which he won from Miguel Cotto in 2009 to write his name in history as the first seven-division champ of the sport (he is currently an eight-division king)—will be at stake on fight night.

Instead, both fighters are talking validation.

“Everybody knows I won both fights,” Marquez said. “I just did not get the decisions. I want to show I’m the better boxer.”

Marquez, though, paid homage to Pacquiao when he said part of his motivation for training hard was because he “wants to fight the best pound-for-pound fighter [in the world].”

But it may have been too late for that. The only thing ringing in Pacquiao’s ears will be Marquez seemingly incessant claims of victory in their first two fights.
Those claims had him training harder than when he prepared for Oscar De La Hoya, his first foray into the sport’s mainstream consciousness.

“I believe I will win this fight,” said Pacquiao. “The question is what I have to do to prove I really won.”

The answer to that would be a smashing knockout, something Roach pointed to when he declared: “Don’t be surprised if this bout ends in the first round.”./Inquirer