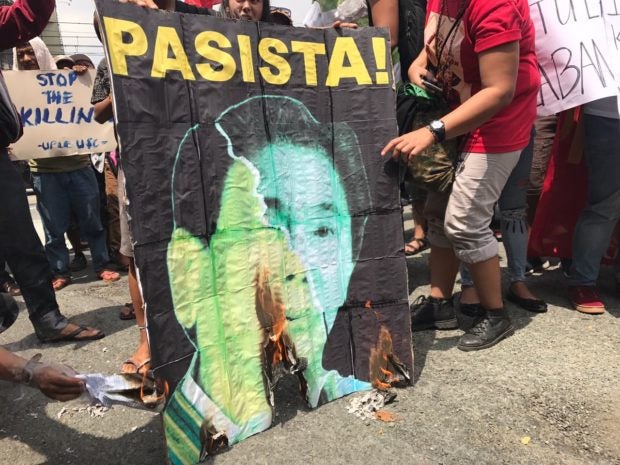 Demonstrators torch “Duterte-Marcos” image as they denounce the “fascist rule” of President Rodrigo Duterte in rally held in front of Camp Aguinaldo along EDSA on September 21, 2017. Jhoanna Ballaran / INQUIRER.net

Activists belonging to the Bagong Alyansang Makabayan-Southern Tagalog (Bayan-ST) set on fire a “Duterte-Marcos” image as they denounced the “fascist rule” of President Rodrigo Duterte in a demonstration held in front of Camp Aguinaldo along EDSA on Thursday.

The protesters burned the composite image of Duterte and the late dictator, former President Ferdinand Marcos, and proclaimed that the two were no different from one another in terms of human rights record.

(The dark past is back through the Duterte’s bravado government.)

Pido said that if summary executions under Marcos were called as “salvage”, the killings under Duterte were tagged as “tokhang.”

(Every day when you turn on the radio, you hear four, seven, and 30 people getting killed. We’re like a cemetery.)

They carried “Never Again to Martial Law” and “Stop the Killings” placards and condemned the government’s alleged “policy of total war against the people” and “wholesale killings of the poor” through its counter-insurgency and anti-illegal drugs programs.

The rally caused minor traffic along the EDSA northbound lane in front of Camp Aguinaldo’s Gate 4. The program lasted for an hour and protesters proceeded to Mendiola to merge with contingents from other areas.  /kga