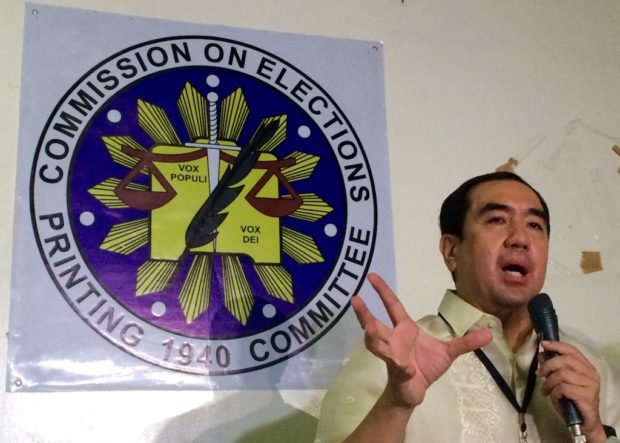 The House justice committee on Wednesday junked the impeachment complaint against Commission on Elections (Comelec) Chair Andres Bautista as a result of a “fatal” technical defect in the document.

By a 26-2 vote, the panel chaired by Oriental Mindoro Representative Reynaldo Umali found the complaint filed by former Negros Rep. Jacinto Paras and lawyer Ferdinand Topacio insufficient in form due to flawed wording in the verification sheet attached to the complaint.

The complaint was dismissed outright and did not go through the subsequent test of sufficiency in substance, leaving the Comelec chair safe from any further attempt to impeach him for at least one year.

Bautista’s wife, Patricia, who appeared at the House hearing with her lawyer Lorna Kapunan, told reporters this was not the end of the case.

“I would just like to say that we remain undeterred. This is just the start. We believe in the system and in the goodness of the people and in their good sense, so at the end of the day we trust in what will be, and this is a bump-and-go,” she said.

Asked if she herself would move to impeach him after one year, Patricia said: “One year is a very long time. I think that light can come in many different forms and in many many different venues for light to be shed on this matter. So we will look for those venues as well.”

Largely based on the strength of his estranged wife’s allegations, the complaint accused Bautista of failing to disclose almost P1 billion worth of bank deposits, investments and properties in his statement of assets, liabilities and net worth.

Bautista welcomed the junking of the impeachment case, saying the corruption allegations were “fabricated and baseless.” He said the dismissal “proves to be a significant step in clearing my name.”

“With the dismissal of the complaint, it is business as usual at the Commission on Elections,” he said.

Bautista, however, said resigning from his post or taking a leave of absence remained part of his options.

“That’s a continuing process of discernment. I continuously think and pray about it,” he said.

The House panel voted 2-27 not to accept a substitute verification sheet by Paras and Topacio, which would have corrected their original filing.

Their original verification to the impeachment complaint against Bautista stated that they “have caused the said complaint to be prepared and have read the contents thereof; and that the allegations therein are true of our own knowledge and belief on the basis of our reading and appreciation of documents and other records pertinent thereto.”

The House panel noted that the phrasing used in the complaint was meant for lawmakers acting as endorsers and complainants than for private complainants.

In their substitute verification, Paras and Topacio attested to having read the complaint and “the allegations therein are true of our own knowledge or based on authentic records.”

Albay Rep. Edcel Lagman noted that in the same way that no rule existed as to the substitution of a complaint, there was similarly no rule allowing a complainant to amend the complaint.