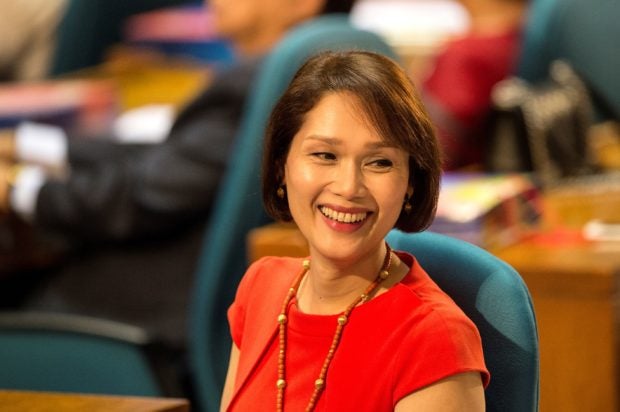 The bill seeking to penalize those who will be found practicing discrimination based on sexual orientation or gender identity was passed on third and final reading during a session at the House of Representatives on Wednesday.

Discriminating a member of the lesbian, gay, bisexual, and transgender may soon land you in jail, once this bill becomes a law.

During plenary session on Wednesday, the lower House approved on third and final reading House Bill 4982, which prohibits discrimination on the basis of sexual orientation or gender identity or expression (Sogie).

At least 198 lawmakers voted to approve the bill on final reading, with zero against and zero abstentions.

Transgender lawmaker Bataan Rep. Geraldine Roman led the lawmakers in waving a rainbow flag before the third reading of the bill.

Bayan Muna Rep. Carlos Zarate even used “beki” or gay language to register his vote for the bill, which he said is timely following the killing of transgender Jennifer Laude by US Marine Joseph Scott Pemberton, and the discrimination suffered by Bunny Cadag.

Siquijor Rep. Rav Rocamora said it is about time to pass a legislation protecting the rights of the LGBT community as enshrined in the Constitution.

“It is unique in our Constitution that we as a sovereign people have promulgated the basic law of the land, to be one under a regime of love and equality,” Rocamora said.

Rocamora said as a former prosecutor, he has handled hate crimes based on Sogie, and so the passage of the bill “is a huge step into ensuring that justice prevailed.”

Dinagat Islands Rep. Kaka Bag-ao, who has been pushing for the Sogie bill, said she is elated that the bill saw the final passage on her last term as congresswoman.

In an interview after, Bag-ao said the bill does not seek to legalize same-sex union, an advocacy even promoted by Speaker Pantaleon Alvarez himself.

The bill entitled “Sogie Equality Act” penalizes the following discriminatory practices based on Sogie: denying access to public service, including military service; including Sogie as criteria for hiring, promotion, transfer, designation, work assignment, re-assignment, dismissal of workers, and other human resource movement and action; refusing admission or expelling a person from any educational or training institution on the basis of Sogie; imposing disciplinary sanctions or penalties harsher than the customary or similar punishments on the basis of Sogie; refusing recognition or accreditation to any organization based on Sogie; denying a person access to public or private medical and other health services open to general public; denying application for or revoking a professional license, clearance or certification.

The bill also penalizes denying a person access to establishments, facilities or utilities, including housing; forcing a person to undergo medical or psychological tests to alter one’s Sogie without the person’s express approval; harassment, coercion or threat in the enforcement of law on the basis of one’s Sogie.

Publishing information meant to “out” a person’s Sogie; engaging in public speech to shame a person or normalize discriminatory practices against the LGBT; subjecting a person to harassment as well as gender profiling; among others.

According to the bill, a person committing a discriminatory act once convicted would be penalized with a P100,000 to P500,000 fine, or imprisonment of one to six years, based on the court’s discretion.

The court may also penalize the person who committed a discriminatory practice with community service.

The bill said discrimination based on Sogie is an “aggravating circumstance” to crimes committed under the Revised Penal Code. /jpv