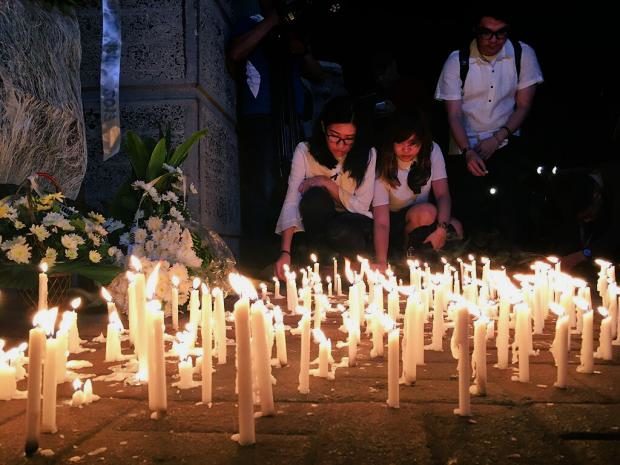 Students light candles at the campus of the University of Santo Tomas on Monday, Sept. 18, 2017, in memory of Horacio Tomas Castillo III, who died of a heart attack after suffering injuries during hazing rites. (Photo by DEXTER CABALZA / Philippine Daily Inquirer)

Hardworking, genuine – but most of all funny and joyful.

Such were the words of classmates and friends of Horacio Tomas Castillo III when they remembered him on Monday night in front of the office of the Faculty of Civil Law in University of Santo Tomas in Manila.

He was best remembered about his post on Twitter on Sept. 6, in which he related that a cashier asked for his name, but he was surprised to find out that the receipt only noted his name as “naka-red” (someonone wearing red).

Horacio was hard to spell and to pronounce. So his family and friends chose to call him Atio.

On Monday, however, the 22-year-old freshman law student became viral again, but not because of his jokes.

Dennis Albert Garcia, a student who’s taking his master’s degree in English, recalled with regret his last talk with Castillo, which was back in May, during back baccalaureate Mass of his batch.

“He really wanted to become a lawyer,” Garcia said. “So when I asked him if he’s going to law school, he said yes.”

Garcia said Castillo was running as treasurer under UST Students’ Democratic Party, to which they both belonge. Garcia noted how Castillo had the “conviction to lead and to serve.”

He learned of Castillo’s death through Facebook: “I was seeing his face all over my feed and I knew, without reading their posts that something bad happened to him.”

On Monday evening, around 300 students held a prayer vigil and lit candles to call justice for Castillo and condemn fraternity-related violence. The vigil was organized by the Faculty of Civil Law Student Council.

They pinned black and white ribbons and lit candles outside the UST main building.

On Twitter, #JusticeforHoracio trended in the country throughout Monday.

The students were reciting the Joyful Mysteries of the rosary, but muffled cries and deep breaths were heard in between.

A friend, Joanne Bejarin returned to UST, where she’s an alumna, to pray for Castillo.

“May justice come to his family and may these people be put in jail for what they did, that we may never forget his death as an example of how cruel brotherhood can be manipulated,” she said between sobs.

In a statement, the Civil Law Student Council condemend the case of hazing that killed Castillo.

The council president, Jonathan Santos, said the event aimed to stress that “his killing was not justifiable, and we condemn the hazing as it happened in the past.”

According to Santos, the three fraternities at the UST Civil Law – Aegis Juris, Suprema Lex, and Gamma Delta Epsilon – were yet to be recognized by the Office Student Affairs for this year.

Santos, a fourth-year law student, had asked Castillo not to join fraternities as he was aware that “violence still happens in frats and soros.”

“It was unexpected that he joined. I asked that if he needed help with the requirements he could ask me,” Santos said

He also recalled that it was him who pushed Castillo to go to UST Civil Law instead of other law schools.

One of those who attended the vigil was Castillo’s classmate since their undergraduate years in political science back in 2012 and even returning to their alma mater last August to pursue law.

“He was so great at class,” the classmate, who requested not to be identified, said. “Most of our teachers recognized how he eloquently answered during recitation.”

He looked up to him as someone whose political convictions were unmoved.

In one of his last Facebook posts, Castillo expressed opposition to the rising number of people turning up dead on streets.

“But despite being a serious person in class and outside, he’s still a bubbly and friendly person,” his old classmate said.

As the Mass ended, the classmate went away from the crowd crying and expressed frustration: “I don’t know who will I blame for his death. The UST admin? The government? The shallow sense of brotherhood?”

He said he and other students were fearing for their safety: “If you think about it, there are killers here with us in UST.”

In a statement on Tuesday, the Castillo family thanked his friends and schoolmates.

“We appreiate the outpouring of love, concern and support for Atio and his family,” the statement said. “We hope you can keep Atio forever in your thoughts, hearts and prayers.” /atm