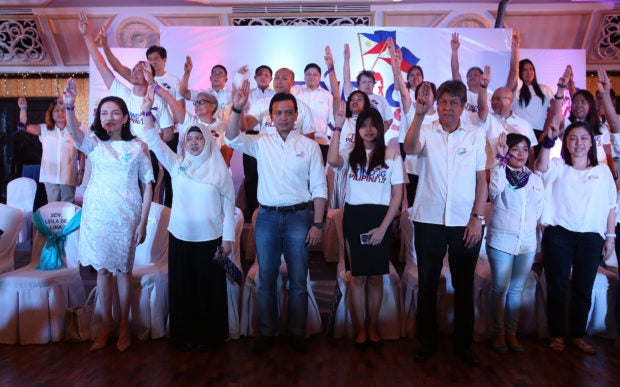 COALITION LAUNCH A new multisectoral organization, #TindigPilipinas, is launched at Club
Filipino in San Juan City to protest the draconian policies of the Duterte administration. Among
its conveners are several senators, former Cabinet members of the Aquino administration and
theMagdalo party-list group. —NIÑO JESUS ORBETA

They know they will be tagged “yellows” who want to oust President Rodrigo Duterte, but the conveners of #TindigPilipinas brushed this off at the launch of the group on Monday.

Instead, they focused their message on calling out Mr. Duterte for leading the “degradation” of the country with his draconian policies.

#TindigPilipinas is a “coalition of coalitions” of different groups seeking to expand nationwide and reach the grassroots, according to one of the conveners, former Civil Service Commission Chair Karina Constantino-David.

The group was launched in San Juan City at Club Filipino, which is associated with supporters of Corazon Aquino, who took her oath there as President in 1986 following the ouster of dictator Ferdinand Marcos in the Edsa People Power Revolution.

A seat with an aquamarine shawl was reserved for detained Sen. Leila de Lima, considered the first political prisoner under the Duterte administration.

“We lay the wrongdoings we see around us on the doorstep of the President. We also recognize that he is not doing this alone and that there are many others helping him along on this destructive path for whatever motives. But the end result is the same: national degradation,” #TindigPilipinas said in a statement of unity.

“We must overcome fear and apathy. We must summon our heritage of courage. We must speak out and unite in protest over the wrongs being committed,” the group said.

#TindigPilipinas will gather on the campus of the University of the Philippines in Diliman, Quezon City, and at the office of the Commission on Human Rights (CHR) on Sept. 21, the 45th anniversary of Marcos’ declaration of martial law.

At the CHR office, a monument of human rights lawyer and former Sen. Jose “Ka Pepe” Diokno will be unveiled.

Diokno was among the opposition leaders arrested and detained after Marcos declared martial law on Sept. 21, 1972. During the early years of the Corazon Aquino administration, Diokno headed the then Presidential Committee on Human Rights.

His daughter, Maris, said it took 14 years to organize and unify groups against martial law. “It will not be the same today. Today, we are all united,” she said.

The conveners were also prepared with an answer to the likely yellow-tagging: It will not stop them from coming together to protest Mr. Duterte’s policies.

“We know that anyone who criticizes the policies of the President are called yellows. That should not stop us from coming together,” Alejano said.

“I am not a [member of the] Liberal [Party], but I have been called yellow. What is important here is that we are not afraid,” Alejano added, with the crowd of some 300 people applauding and cheering. The Liberal Party is the party of former President Benigno Aquino III.

Alejano said he was asked if #TindigPilipinas was formed because the Office of the Ombudsman was set to file charges against former President Benigno Aquino III.

“I said no because if President Aquino had made a mistake, he should answer that or face the charges because he can defend himself. We are not doing this for only a few. This is for the country,” Alejano said.

In its statement, the group said the country was “being led down a dark path filled with violence, contempt for law and hate; where honest debate is not only shouted down, but every attempt at sobriety in public discourse is dismissed with threats.”

It called out the Duterte administration for the drug killings, the hate speech, the weakening of democratic institutions, and the erosion of the nation’s security and social stability, among others issues.

“Instead of being a voice of reason, our country has been polarized, notorious for its imprudence and recklessness, our communities paralyzed in fear,” the group said.

Like the Movement Against Tyranny (MAT) launched a few weeks ago, #TindigPilipinas did not categorically mention the ouster of Mr. Duterte.

A youth member said the group would focus on “calling out the excesses of government” and urge the people to speak out against the drug killings.

The group will also call for transparency in government transactions and seek an investigation of smuggling at the Bureau of Customs.