‘Priest freed by AFP, not negotiators’ 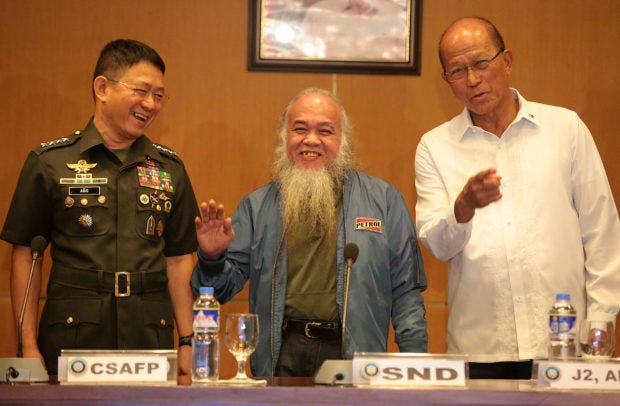 President Rodrigo Duterte on Monday dismissed suggestions that Fr. Teresito “Chito” Soganub, the vicar general of Marawi, was released by his captors after back-channel talks with the Islamic State (IS)-inspired terrorists.

“Impossible, impossible. I will not even agree to look at them,” Mr. Duterte told reporters in Caloocan City.

“Father Soganub was not released. He was liberated through a special operation. They really focused on him because they (the hostages) were held separately,” he said.

“That means the Special Forces of the Rangers crawled to get him,” he added.

They had been held by the terrorists for 117 days.

Mr. Duterte said that once Soganub was presented to him, he would ask the priest if it was true that terrorists repeatedly raped their female hostages.

“The first questions would be not about the war [but] how the women were treated there. All of those who escaped — and this I got from the media, the newspapers — said they (the women) were being repeatedly raped every night,” he said.

“That’s a gross violation of the rights of a human being, an affront to the dignity of the women of the Philippines,” he said.

Mr. Duterte said the military operation would “not end until the last terrorist is taken out.”

“[T]hat is my order to the Armed Forces of the Philippines and the police,” he said.

The priest, flanked by Defense Secretary Delfin Lorenzana and AFP Chief of Staff Gen. Eduardo Año, appeared to be in good health and high spirits when he was presented to reporters in military headquarters at Camp Aguinaldo in Quezon City.

Soganub expressed his thanks but gave no statement.

“God bless you all. Pray for me, for my healing and recovery,” Soganub said.

Lorenzana said the rescue of Soganub and Acopio came as government troops pressed an attack to retake the Bato Ali mosque, which the terrorists used as command center.

“[O]ur troops gained the upper hand, the terrorists were forced to withdraw to nearby structures at the periphery of the mosque,” Lorenzana said.

“As the intensity of the armed confrontation continued to escalate in favor of our troops and while the terrorists were busy repelling the attack, the troops had the opportunity to snatch Father Chito and Mr. Acopio,” he added.

The troops also captured the Jamaitul Philippine al-Islamiyah, another stronghold of the terrorists.

Lorenzana commended the troops for the “excellent job.”

Año said Soganub had yet to undergo tactical debriefing.

“He underwent harsh conditions. We want him to rest and adjust after his medical check-up,” Año said.

The Prelature of Marawi is preparing a “healing and reintegration program” for Soganub and Acopio.

Duyog Marawi, the prelature’s social action arm, said in a statement on Monday that the program had been ordered by Marawi Bishop Edwin de la Peña, who was in Abu Dhabi when he heard Soganub and Acopio had been rescued.

The program, Duyog Marawi said, includes general medical check-up and hospital confinement, to be followed by a long period of rest and trauma therapy.

During that period, Soganub’s duties at Mindanao State University — including his chaplaincy, education, interfaith and peacemaking programs — will be temporarily assumed by other priests and lay missionaries, the group said.

“Our prayers were answered. God is good all the time,” said Marilyn Soganub, the priest’s elder sister.

Soganub and dozens of other civilians were snatched by the terrorists as they rampaged across Marawi and laid siege to the predominantly Muslim city on May 23.

The terrorists are from a faction of the Abu Sayyaf bandit group led by Isnilon Hapilon and the terror group led by brothers Omarkhayam and Abdullah Maute, whose family in Lanao del Sur has deep connections in the lakeside city and surrounding areas.

Hapilon has pledged allegiance to the IS group, which has reportedly named him “emir” in Southeast Asia.

Together with the Maute gunmen and some foreign fighters, mostly Indonesians, Hapilon’s band seized parts of Marawi to establish an IS enclave in Southeast Asia.

As of Monday, more than 800 people have been killed in the fighting: 673 terrorists, 149 soldiers and police, and 47 civilians.

Hapilon is among those still fighting but several of the Maute brothers are likely dead, Año said, citing information provided by civilians who escaped and some captured terrorists.

“Based on the debriefing of those captured and surrendered, Omar Maute is the only one left. Abdullah, Madi and Otto, they’re all dead,” Año said.

He said about 10 foreigners—Malaysians and Indonesian—were still in the battle among some 50-60 Maute and Abu Sayyaf terrorists, who were holding 45-80 hostages.

Speaking to reporters in Malacañang, Maj. Gen. Restituto Padilla Jr., spokesperson for the military, gave slightly different figures, saying the terrorists were still holding 40 to 60 hostages, some of whom they had pressed into the battle, boosting their force from 60 to 80.

“The enemy’s strength, per the last validation, seemed to have increased from 60 to 80 . . . news and information . . . indicated that perhaps some of the hostages previously held have forced to join the [terrorists’] ranks,” Padilla said. —With a report from the wires