Woman loses boyfriend to Marawi war, then their baby 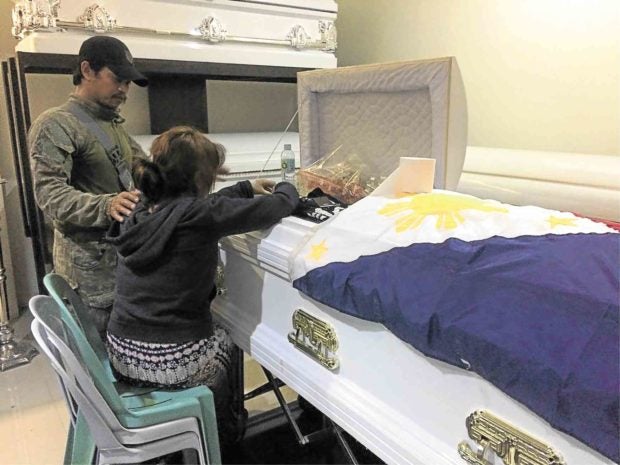 Anne (not her real name) collapsed upon learning that Cpl. Jaime Invento was killed while fighting Islamic State-inspired militants in Marawi City on Saturday. She was already in a hospital when she regained consciousness.

Anne, 28, was to give birth to their firstborn next month, but she underwent induced labor after she learned about her boyfriend’s death.

Five minutes after Anne woke up, her baby girl died.

Bato Ali Mosque was considered the command center of the militants.

The operation also led to the rescue of Marawi Vicar General Teresito Soganub and another hostage.

The operation, however, left Invento dead and four others wounded.

During the interview with the Inquirer at St. Peter’s chapel here on Sunday, Anne excused herself. She then went to her boyfriend’s coffin and continued scribbling on a piece of paper — a farewell letter to Invento.

“You have fought a good fight. It pains me more seeing you like this, but I’m letting you go now. Have a safe journey, Daddy. Always remember that you will always be my best ‘assaulter.’ You know how much I love you and I know how much you love me,” Anne said in her letter.

At the back of the paper is another letter for Invento written on June 29. She addressed the soldier as her “dearest superman” and wrote that she missed him.

“It’s been 36 days, eight hours, 15 minutes and 36 seconds since you went away. I know you are already tired and weary. Hold on, Mahal, a little bit longer … and I love you so,” she said. —Divina Suson