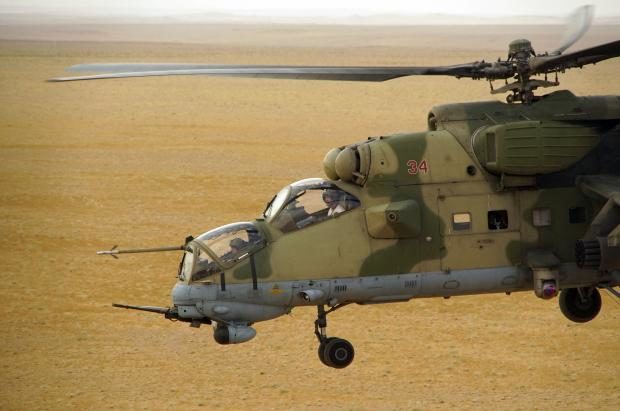 In this photo, taken on Friday, Sept. 15, 2017, Russian military helicopter flies over a desert in Deir es-Zor province, Syria. A US-backed force in Syria said a Russian airstrike wounded six of its fighters Saturday near the eastern city of Deir el-Zour while in southeast Syria, Syrian troops and their Iran-backed allies began a new offensive aiming to capture areas along the Iraq border under the cover of Russian airstrikes. (Photo by AP)

BEIRUT — Syrian troops battling the Islamic State group crossed to the eastern bank of the Euphrates River in Deir el-Zour on Monday, securing their hold on the eastern city but threatening a potential standoff with US-backed forces operating nearby.

The pro-government forces meanwhile announced that they had secured the airport in Deir el-Zour, allowing two military transport aircraft to land. Al-Manar TV, the media arm of Lebanon’s Hezbollah, quoted an unnamed general who said the airport is “90 percent secured.”

Syrian government forces broke a three-year Islamic State siege of parts of Deir el-Zour earlier this month and are fighting to drive the militants from the city, their last major urban stronghold in Syria. The city is home to nearly 100,000 residents.

Russia, which has provided crucial air support to Assad’s forces, announced the crossing of the river, saying in a statement that the troops used a pontoon bridge: “The Syrian army storm units have pushed the IS militants out of several villages on the eastern bank of the Euphrates River and are continuing their offensive toward the east, extending their gains.”

US-backed and Kurdish-led forces have also been advancing on the eastern side of the river, as both sides seek to expand their control of the oil-rich province bordering Iraq. Many oil fields, including al-Omar, Syria’s largest, are on the eastern bank.

Over the weekend, the US-backed Syrian Democratic Forces said its fighters were hit by Russian airstrikes on the eastern bank of the river, in an industrial area they recently liberated from IS. Russia denied it was behind the airstrikes.

Rami Abdurrahman, the head of the Britain-based Syrian Observatory for Human Rights, confirmed the crossing, which he said was preceded by intense aerial bombing on the eastern bank.

“Even if the pro-government [forces] keep up their advance in the city, it will mean nothing if they don’t control the eastern bank,” Abdurrahman said.

The US-backed offensive is focused on the Iraq border area, which is still controlled by IS. Washington fears that further advances by pro-government forces in Syria could help Iran expand its influence across the region via a land bridge stretching through Iraq, Syria and Lebanon, all the way to Israel.

Iran is a key ally of Assad, and has provided financial and logistical support to his forces throughout the six-year civil war.